The lost history of Dublin uncovered by Luas works 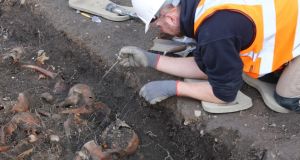 Luas Cross City archaeologists uncover the skeletons of up to 1,700 cholera victims buried in two trench graves near Grangegorman, in 2015.

What happens when you peel back the surface of a city? For the last four years, as part of the Luas Cross City (LCC) project, teams of archaeologists have been stripping a ribbon of the capital’s footpaths and roads and peering underneath. Their painstaking work is almost complete.

The dig, from Broombridge to the north and St Stephen’s Green to the south, was undertaken to prepare for the laying of tracks and to reposition utilities buried underneath, but it has also exposed slices of history, snapshots of time that help mould the character of a city as it matured over hundreds of years. How Dublin coped with mass death, facilitated commerce and trade, how society flourished.

“There is still a potential to find a huge amount of information about our city centre just under your streets,” says Emer Dennehy, project archaeologist at Transport Infrastructure Ireland (TII) who has been overseeing the LCC dig.

In the TII offices near the Phoenix Park, Dennehy and her colleague Rónán Swan, TII’s head of archaeology and heritage, pore over freshly prepared maps and photographs of their project. Brimming with enthusiasm, they emphasise that the Luas project has offered a rare peek at the anatomy of Dublin.

“At one point in time this island had no people. So everybody on this island immigrated into it,” says Swan.

The excavations began in June 2013 and are expected to conclude about the middle of next month. An overview of the project will be provided at a seminar in Dublin tonight and at the Archaeofest event in Merrion Square on Saturday where the public can engage with those who helped carve out kilometres of muddy trenches.

There will also be literature, conferences, audio material and eventually a book – the magnitude of findings, which will not be fully realised for another 18 months of analysis, will not be allowed to slide into obscurity. Digging up the city centre has led to so much more than traffic and business disruption.

Arguably the most significant of all that was unearthed was the mass grave of victims of the cholera epidemic that ravaged Ireland in 1832.

At the time the cause of the disease was not understood; believed to have been spread by noxious air on the easterly winds, rather than the actual source – contaminated drinking water. The outbreak has been credited with helping inspire Bram Stoker’s Dracula.

About 1,600 of the estimated 5,200 who succumbed in Dublin were buried at the Richmond penitentiary near Grangegorman. More than four decades later, in 1875, during an expansion of the Midland Great Western Railway depot, the bodies were dug up and reinterred in two channel trenches nearby. It was here that TII archaeologists discovered them in muddled piles.

For Flood, it was a case of history repeating itself – one transport infrastructural project requiring the movement of a mass grave, repeated over a century later with the same process. This time, the project team will hold talks with the National Museum to discuss the final, appropriate resting place for the remains.

“So suddenly to be applying archaeological techniques to extremely recent, modern events in Ireland . . . I found that to be really exciting.”

There were other bodies too, exhumed from just beneath the well-trodden surfaces around Trinity College. During the expansion of the city, the College Green area would once have been on the periphery, much of it marshland on the flood plains of the Liffey and river Steine (now underground).

Five skeletons were unearthed from these “Tudor burials”. It is possible some may have been the victims of executions, relatively common in the area until 1784.

For example, in 1584 the Catholic Archbishop of Cashel, Dermot O’Hurley, was executed at Hoggen Green, as the area was once known, following a court martial for his role in the rebellion of the 1580s (there is no suggestion his remains were among those discovered).

One skeleton unearthed outside the gates of Trinity College during the utilities phase of the LCC was well publicised. There was an initial suggestion it might have been a Viking site, which would have been a significant find, carrying with it the potential for major delays to track laying. In the end, however, no Viking sites were discovered.

On the other side of Trinity College, huge effort went into ensuring the Luas project would preserve the fifth-century St Patrick’s Well.

The legend goes that St Patrick struck the ground and opened a natural water spring. The well’s actual origins are thought to date from the pre-Christian era and it became a source of fresh drinking water for the early medieval Dublin inhabitants.

When the Wide Street Commission (WSC) – a project that commenced in 1757 to compulsorily purchase land and make the city more open and accessible – reshaped Nassau Street, the ground level was further raised and the well disappeared beneath. LCC archaeologists have attached several vibration censors to ensure the nearby track foundations cause no damage to the preserved site.

In another case of history repeating itself, the dig uncovered lengths of wooden water mains supplying the wealthy Georgian homes along Dawson Street, thought to be its first piped water supply, for which rates were introduced. Residents refused to pay additional rates for increased water when the system was pressurised.

Back on the north side, the WSC also left its ghosts beneath O’Connell Street. Archaeologists uncovered the walled remains of various buildings that once crossed the capital’s broad thoroughfare, the remnants of a more cramped and labyrinthine city plan.

“We are constantly finding evidence of the original street surfaces that the Wide Street Commission laid down and were later built over,” says Dennehy. “In the 1700s here they were effectively building a new city . . . and seeing their vision and the fact that we are still living in their vision.”

Project managers were surprised that few remnants of the 1916 Rising were brought to the surface – there was a noticeable absence of bullet casings or other munitions.

The widening of O’Connell Street Upper, then Sackville Street, is illustrated on Rocque’s map of 1756. O’Connell Street Lower (from Henry Street to the Liffey) was named Drogheda Street until 1785. LCC excavations opposite the GPO found evidence of wells and cellars.

Brick deposits were found beneath O’Connell Street Upper, possibly from adjacent “brick fields” in Moore Street. In the 1770s brick manufacturing was banned in the city in an effort to reduce pollution and improve public health.

Another major focus of the operation (still under way) was the long-defunct Broadstone Harbour, a dock built as a cargo terminus for the Royal Canal, lying between 30cm and 7m under a council car park in north Dublin.

At the time of its development in 1796 it was surrounded by fields on the outskirts of the city and was used to unloaded cattle, turf and other cargo from around Ireland. Getting any closer to the city was difficult due to the cost of real estate – Kings Inn purchased its nearby lands in 1800 for £1 million.

They also discovered pikes among a cache of stashed weapons, which could have related to the 1798 rebellion. Eventually deemed commercially unviable with the spread of railways, the harbour was sold to the Midland Great Western Railway in 1845 and infilled in 1877.

It was constructed of finely-cut granite walls retained by a series of buttresses. LCC carried out a 3D survey of its walls, which can offer a complete virtual tour of the harbour after its piecemeal excavation.

For the teams of archaeologists involved, the LCC dig represented a rare opportunity to sketch out the story of the capital. Metro North, the planned rail project to run from St Stephen’s Green to Dublin Airport, may offer a similar opportunity – it will certainly benefit from the detailed work already carried out.

But given the busy commercial hive that 21st-century Dublin has become, scraping away at its subterranean history is not something that will happen too often, not on this scale.

“To see my city in a different way . . . that for me would be one of the most exciting parts of the project,” says Swan, who has worked in transport-related archaeology for almost 20 years.

There is, he says, often a debate about the value of archaeology in places where there is an abundance of historic maps and records, and of previous excavation.

“[But] we are putting a texture, a depth [to it],” he says, surrounded by photographs of four years of rediscovered treasures. “It becomes something more tangible.”

A summary of findings of the LCC archaeological works will be presented at the Between the Lines seminar at Chartered Accountants House, Pearse Street, Dublin, 2-6pm Thursday, and at the Archaeofestevent, organised by the Institute of Archaeologists of Ireland, in Merrion Square, Dublin, on Saturday, iai.ie/archaeofest

Between the Lines: The Archaeology of Luas Cross City