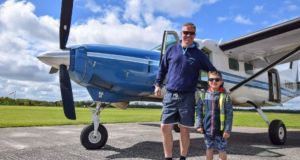 Pilot Niall Bowditch and Kasper Kacprzak (7) were killed when an aircraft in which they were travelling crashed in a forested peat bog in Co Offaly on May 13th, 2018

The parents of a seven-year-old boy killed in a 2018 plane crash have taken legal actions against the Irish Parachute Club and the owners of the aircraft for injuries and loss.

English pilot Niall Bowditch (47) and Kacpar Kacprzak (7) were killed when a Cessna 208B aircraft in which they were travelling crashed in a forested peat bog in Co Offaly on May 13th, 2018.

The plane was returning to the Irish Parachute Club’s airfield in Clonbullogue near Edenderry after 16 skydivers had jumped from the aircraft.

The boy’s father was a member of the club.

An Air Accident Investigation Unit report, published in March, concluded that a steeply banked turn led to the loss of control of the light aircraft and there was insufficient height above ground to allow a successful recovery. The plane descended at a near-vertical altitude crashing nose-first at Ballaghassanan.

The report found the impact was so great that the entire front section of the aircraft was below the surface of the peat bog to a depth of almost 5m and the plane had to be dug out with a mechanical digger, delaying the recovery of the bodies of the two victims from the wreckage.

Parents Krzysztof Kacprzak and Kamila Sliwka have issued High Court proceedings against the Irish Parachute Club, along with five named members of the club, and Parachuting Caravan Leasing, the English-based company that owned the Cessna 208B aircraft.

The named members of the club listed as defendants are Michael Flaherty, Maurice Hayden, Noel Larragy, Vernon McCarthy and Susan Fryer. The personal legal representative of the pilot, Mr Bowditch, who lived in the UK, has also been named as a defendant in the case.

The parents, who are represented by solicitor Deborah Crowley at the Dublin law practice Ferrys, claim negligence along with breach of duty and statutory duty for permitting the boy to be on board and for permitting the aircraft to execute an excessively steeply banked left turn.

The couple, who are originally from Poland and have been long-time residents in west Dublin, claim the accident caused them personal injuries and psychiatric shock and loss.

Mr Kacprzak, a 41-year-old technician, was a member of the search party who spread out from the airfield to locate the crashed plane. He has since been diagnosed with psychiatric conditions as a result of the tragedy.

Ms Sliwka, a 39-year-old technician, was at the airfield when the search took place to find the downed aircraft and was aware of searching parties returning and being unable to locate the plane, adding to her distress.

The boy’s mother had to undergo a number of interviews with gardaí and to provide DNA samples for the identification of her son following the crash.

The woman has suffered constant flashbacks and distress in the wake of the tragedy.

Both husband and wife have suffered from the effects of post-traumatic stress disorder since the incident, their legal claims state.

Victor Clarke of Carlow law firm Clarke Jeffers & Co, who represents the Irish Parachute Club and its named members, said they could not comment on live proceedings before the courts.

The club and its members said: “Kacpar was a lovely little boy who lived for aviation. His father is a long-standing member of the club and the family are well known to the club. Our hearts and sincerest condolences go out to them.”

Solicitor Gerry Carroll of Dublin firm Whitney Moore, representing the aircraft owner Parachuting Caravan Leasing, said that the firm felt it would not be appropriate to comment.

The couple’s cases have yet to be listed by the High Court.