The Boris bridge: Will Johnson’s ‘vanity project’ ever happen? 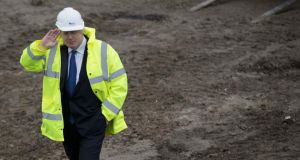 At their closest point, only 20km separate Torr Head in Co Antrim from the Mull of Kintyre; on a clear day on the north coast, you can see Scotland.

In those few sentences, the Boris Bridge was born. Downing Street is “looking into” the prospect of a bridge between Northern Ireland and Scotland, according to a spokesperson; work is being carried out by a “range of government officials, with that work being reported to No 10.”

“Watch this space,” Johnson – now the UK prime minister – told the House of Commons in December, and “watch the space between the islands.”

In Northern Ireland and Scotland, the governments are watching. On February 14th the North’s infrastructure minister, the SDLP MLA Nichola Mallon, and the Scottish transport secretary, Michael Matheson, wrote to the UK transport secretary to express their concerns – not least that there has been “absolutely no consultation” with them on what is a devolved matter.

Both argue that the £20 billion (€23 billion) potential price tag would be better spent on infrastructure projects in Scotland and Northern Ireland “rather than indulging the prime minister with this vanity project”, as Matheson put it.

“In terms of unviable bridges and vanity projects the prime minister has form on this,” Mallon tells The Irish Times. “I’m very clear that is not going to happen under my watch here in Northern Ireland.”

There is little to go on. “Frankly, most of it’s guesswork at the moment because there’s a lot of work to do before feasibility can really be proven,” says Ian Firth, a bridge designer and Fellow of the Institution of Structural Engineers.

Can it be done? “Yes is the short answer. It’s always feasible to do things, but it does come down to the question of cost, and there are huge questions about the desirability of such a thing.”

Two routes are generally regarded as the most likely options. One is the short, 20km route from the north Antrim coast to Kintyre, the other, from Larne to Portpatrick, is similar to the ferry route to Stranraer.

The second option is longer, but is further south and has better road links, though both routes would still require a substantial road upgrade on either side of the Irish Sea.

Bridges of this length have been built before. The Hong Kong-Zhuhai-Macau bridge is a 55km link which uses bridges, an undersea tunnel and several artificial islands to cross open sea; it is, according to Dr John McKinley, senior lecturer in engineering at Queen’s University, Belfast, the structure that comes closest to what might be required for an Ireland-Scotland link.

In the Irish Sea, the water is deeper and the seas stronger. “It isn’t the length that’s the engineering challenge, but the environment and the depth,” says McKinley.

The sea bed between Northern Ireland and Scotland is between 50 and 150m deep; the deck of the bridge must also be sufficiently high to allow shipping to pass underneath.

McKinley compares it to the Øresund bridge, which links Denmark and Sweden; it has a clearance of about 60m. Assuming a similar measurement, this would mean the largest piers – the structures which support the span of the bridge – “would be about 210 metres from seabed to deck. That’s big.”

A suspension bridge would give the longest spans; floating technology - similar to that used to build deep sea oil platforms - is currently being used in Norway. “There is also a very intriguing type of structure which is a floating submerged tunnel . . . which is like a tube floating but held down with tethers to the sea bed,” says Firth. “The floating tube might be an interesting option which certainly would be considered by any technical feasibility study.”

There is also the matter of Beaufort’s Dyke, a natural trench 300m deep but only about 3.5km wide. “Any bridge from Larne to Portpatrick would have to have a central span of about 500m to 1000m, which would require support piers roughly 250m to 500m either side of Beaufort’s Dyke,” says McKinley. “That’s close.”

Squandering £20 billion on a bridge between Northern Ireland and Scotland . . . is a complete non-runner

After the end of the second World War, it was used by the UK for the disposal of munitions; the Ministry of Defence estimates that more than a million tonnes of conventional and chemical weapons were dumped there. There is also radioactive waste.

The assumption is that the Dyke would be avoided. “Don’t go playing around in there,” says Robin Rickard, principal consultant with explosive ordnance consultancy Exord. If left alone, he explains, abandoned munitions, are “very safe”, not least because they are not armed; the greater threat is from so-called short dumping, where munitions were dropped in shallower water on the way to the Dyke.

Avoidance is the best policy, Rickard says; once an exact route is determined, studies would be carried out to find the location of any unexploded ordnance. “If you can’t avoid them you send an RV down, you dispose of them with divers or whatever, you blow them up.”

This would be factored into the cost of any potential bridge. Johnson has put the price tag at “only” about £15 billion [€17 billion]. This, says McKinley, “is really going out on a limb because it could be £20 billion, it could be £60 billion [€71 billion].”

There have been significant cost overruns on, not least, the Hong Kong bridge, which cost three times its original estimate. “I don’t see this as being a feasible thing to do economically.”

“I’m not going to quote a figure,” says Firth. “There have been various numbers thrown around rather irresponsibly, given there’s no basis on which to create estimates, but given that it would be very expensive you might ask whether the money would be better spent upgrading the ferry service and the roads.”

Seamus Leheny makes this same point. The policy manager for the Freight Transport Association in Northern Ireland, he says it is “not a foregone conclusion that every single lorry today would just start using the bridge.” Indeed, if a bridge was to be built, “you would probably put it from the Dublin area to Holyhead, because that’s the central corridor into the south of England. ”

But he compares it to “your house having multiple leaks in the roof and thinking about building a new conservatory.

“You’ve got to get your priorities in place. Twenty billion pounds would radically overhaul infrastructure in Northern Ireland, with motorways, dual carriageways. You could probably subsidise free ferry transport for over a century and provide free public transport and new rail links for that same amount of money.”

Dr Esmond Birnie, senior economist at Ulster University, has looked at the figures; he concludes it is “hard to see how the quantified (and properly discounted) economic benefits could in fact exceed the cost.”

Yet, he adds, “something can be technologically feasible without providing economic benefits greater than the costs. The Concorde supersonic aircraft and post-war British atomic power stations may have been engineering marvels but they were far from commercially viable and might well have ‘failed’ the test of an economic cost benefit analysis.”

This is the DUP’s argument; it is the only one of the North’s five main political parties to support the bridge. “Physical links and major infrastructure projects like this all over the world are judged not only on their economic benefits but on their political benefits, including how they integrate countries,” the East Antrim MP, Sammy Wilson, told the Commons in December.

Post-Brexit the bridge would be not only a physical link with the rest of the UK, but a symbol of Northern Ireland’s place within the Union.

“If money was growing on trees, would we look positively at any proposed bridge? We would,” says Mallon.

“But I think anyone who has any common sense will realise that, when you have a situation where you don’t have enough finances to be switching on broken street lights or filling potholes, or we can’t invest the money that’s required in our waste water infrastructure, to be talking about squandering £20 billion on a bridge between Northern Ireland and Scotland . . . is a complete non-runner.”