The 10 cyclists killed on our roads to date this year 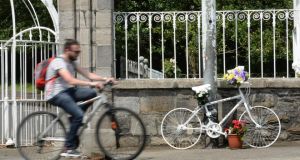 A cyclist passes the Ghost Bike, locked to a pole on Conyngham Road, Dublin, in memory of Daragh Ryan, who was killed at that spot on March 12th, 2017. Photograph: Dara Mac Dónaill

Eleven cyclists have been killed in traffic collisions on Irish roads since the start of the year, more than the total number killed in 2016.

Tonya McEvoy (34) was the first cyclist to be killed this year. McEvoy was killed in a collision with a car in Rathcoffey, Co Kildare, on February 12th. She was an avid amateur cyclist and was out training with the Orwell Wheelers Cycling Club when she was involved in the collision.

Daragh Ryan (30) was knocked down as he was exiting the Phoenix Park in Dublin on March 12th. Ryan was coming out of the park on to Conyngham Road at about 2pm when he was involved in a collision with an oncoming driver. The junction is considered to be a blackspot for traffic collisions and is a very busy stretch of road.

Des Butler (50) was a Limerick father of two killed in a traffic collision with a camper van when he was out cycling in Co Clare, on March 26th. Butler, a cycling enthusiast, was out training for an upcoming 80km race. He was cycling down the N18 near Bunratty when his bike collided with the van travelling towards Ennis.

Luby Maryori Arroyave Ramirez was another cyclist killed on the roads in a March 27th incident. Ramirez, who was in her late 30s, was involved in a collision with a truck at a roundabout in Templeogue. The incident occurred at a busy junction between Templeville Road and Wellington Road in the south Dublin area.

Robin Ball (62) was a cyclist knocked down in Cork in a traffic incident with a car on April 21st. Ball was originally from the UK and had been living in Kilcoe, Co Cork for about 20 years. The incident occurred at Lissanoohig, near Skibbereen, and Ball was in intensive care in Cork University Hospital for a week before dying from his injuries.

Annette Mannix (48) died after a collision in Killarney with a tractor in May. Mannix’s bike was in a collision with the tractor on what locals described as a dangerous junction on the N22 bypass, on May 10th. She was a full-time carer for her elderly mother. Mannix had been cycling with a local club on the spring evening and was pronounced dead at the scene by emergency services.

Donal O’Brien (46) was killed in a crash in Cork city. He was a married father with one child and ran a garage. He was known as a big fan of motorsport, and was involved in the fatal collision with a car while cycling on the Ballincollig bypass heading into Cork city. He died after the crash on May 14th. O’Brien was from the Ovens area.

Patrick McHale (54) from Ballina, Co Mayo, was killed in a traffic collision on May 28th. McHale was knocked down by a car while cycling in Rathoreen, Ballina in the evening. He was involved with his local Mayo cycling club, Lisheen Conneal Cycling Club.

Janet Price, an American tourist visiting Ireland, was in her 60s and from Washington State. She was travelling around Kerry with her husband Don Theiler. They were cycling around the Gap of Dunloe, Co Kerry, when she collided with a 4x4 vehicle on a narrow mountain road. The crash happened on May 30th.

Pádraic Carney (53) was the principal of St Louis primary school in Rathmines, South Dublin. He was involved in a traffic collision with a car at a busy junction on Butterfield Park in Rathfarnham while cycling from his home to St Louis school at 8:10am on Monday, June 19th. He was taken to Tallaght Hospital where he was pronounced dead on Tuesday, June 20th.

* An earlier version of this article included the death of Paul Hannon (below) as one of the cyclists killed. However, the Garda investigation has established that Mr Hannan had dismounted from his bicycle at the time of his death.

Paul Hannon (40) died in a fatal collision with a taxi on Patrick Street, Dublin, in late March. Hannon, originally from Co Clare, was a solicitor working in the Central Bank and lived in Castleknock. He collided with a taxi in the early hours of the morning of March 24th. He had previously worked for KPMG and for the aid agency Goal in Sierra Leone.