Dáithí Ó Sé to host his eighth contest, but 65 hopefuls will be cut to 32 before TV coverage 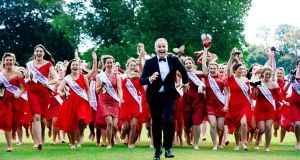 The Irish summer sputtered towards its traditional denouement on Tuesday as presenter Dáithí Ó Sé descended by helicopter from the heavens for the annual unveiling of the contestants for this year’s International Rose of Tralee competition.

Sixty five young women from Ireland, Britain, the US, Canada, Australia and New Zealand, continental Europe and the Middle East gathered at Malahide Castle, Dublin, for the photocall, kicking off an arduous week-long schedule which culminates in a two-night televised endurance test next Monday and Tuesday in Tralee’s Festival Dome.

Lower ratings last year suggested the show might be losing some of its unique allure but, more than 20 years since Father Ted parodied the peculiarities of Irish “lovely girls” contests, the Rose of Tralee has proved its remarkable resilience in the face of changing times and mores.

Ó Sé, presenting his eighth contest, said he had been working closely with all the Roses for the last three days. “By the time they get on stage, you know them very well,” he said. “They will see me as a familiar face.” He also hinted that he might have offered a few dos and don’ts of stagecraft to the Roses. “Some people want it all to be craic, and some want it all heavy stuff. One or two would be trying out a few jokes. I’d tell them to do what comes naturally.”

As for his own performance: “Things will come out of my mouth. But what they are, I don’t know.”

RTÉ was criticised last year for staging a “brutal” on-camera cull of half of the original pool of contestants in order to gin up its fly-on-the-wall coverage, which won’t happen again this year. However, the 65 hopefuls will still be cut back to 32 for the TV show, with the first 16 to make the cut announced at a new “Celebration of Roses” event at the Dome in Tralee on Thursday, and the second batch revealed at a private breakfast on Saturday morning, which will be attended by all 64 Roses (including the unfortunates who got the chop on Thursday night).

Around 200 men aged between 21 and 30 applied to become Rose escorts at this year’s festival. One of the successful applicants is 22-year-old Jackie Healy-Rae Jnr, son of poll-topping Kerry TD Michael Healy-Rae. “Jackie was one of 120 called for interview, then we drilled it down to 70 who went through an endurance boot camp,” said the festival’s communications manager John Drummey. “He came through it all. He’s a perfect gentleman.”

The current bookies’ favourites are Sydney Rose Aisling Walsh and the Dublin Rose Maria Coughlan. This year’s San Francisco Rose, Amanda Donohoe, is the sister and cousin of two of the young people who died two years ago in the Berkeley balcony tragedy.

Following their unveiling in Malahide, the Roses travelled to Kerry, where their first official social engagement of an arduous week was the evening’s greyhound races in Tralee.