Portiuncula says material placed on window without knowledge of management 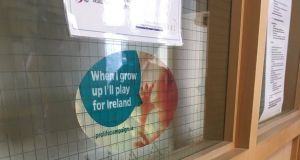 The sticker posted on glass facing a waiting area at Portiuncula hospital in Galway. It has been removed after complaints.

A sticker promoting an anti-abortion organisation, with a picture of a foetus sucking its thumb, has been removed from display at a public hospital in Galway after complaints.

The large sticker featured the website address for the Pro-Life Campaign and the words: “When I grow up I’ll play for Ireland. ”

It had been placed behind glass facing the waiting area in the phlebotomy room at the Health Service Executive-funded Portiuncula University Hospital.

It was spotted by a member of the public who said on social media they had reported it to the hospital and had been informed it would be removed.

In a statement, the Saolta University Health Care Group, which runs the hospital, said: “This sticker was displayed without the knowledge of hospital management in Portiuncula University Hospital and is now removed.”

On Twitter, the HSE’s social media team responded to queries saying the sticker had been displayed without permission from hospital staff and had been removed as soon as management became aware of it.

Saolta (formally West/North West Hospitals Group) is one of six new hospital groups announced by then minister for health James Reilly four years ago as part of a re-organisation of public hospitals.

Its paediatric department is linked to Crumlin Children’s Hospital for shared care arrangement in relation to oncology and it also has academic links with the University of Limerick.

A spokeswoman for the Abortion Rights Campaign said people should not be exposed to “propaganda” when receiving medical care.

She said the Eigth Amendment to the Constitution, which gives effect to the ban on abortion, affected “all pregnancies in Ireland, even wanted ones”.

“The health system will need to prepare for the expansion of the extremely limited abortion access we currently have, once we have won a referendum to repeal the 8th amendment,” she said.

“Abortion access, not misleading propaganda, is a European norm. We require free, safe and legal abortion access so that both wanted and unwanted pregnancies get the best possible care according to the needs and wants of the pregnant person.”