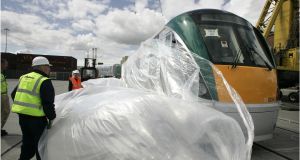 The National Transport Authority (NTA) has issued a tender for pre-owned trains to meet urgent commuter demand, particularly in the greater Dublin area.

The authority is seeking between 60 and 80 vehicles which must be ready to go into service by February 2020.

The projected cost of the second-hand trains is not being revealed because a tendering process is involved.

Irish Rail is also progressing an order for 41 new InterCity carriages which it says could enter service by 2021. The cost of this order is expected be in the region of €100 million.

Both orders are separate to a promised allocation of 300 new trains under the National Development Plan. They arise as Irish Rail struggles to meet demand, with a record 47 million passenger journeys last year – a figure set to rise to 50 million in 2019.

Tender documents from the NTA for the pre-owned trains specify they must be capable of operation in units of three or four vehicles, with a driver’s cab at each end of each unit.

In style, these would be similar to the 29000 series diesel commuter trains currently operating on routes in the greater Dublin area and a handful of other routes including Longford, Dundalk, and Gorey.

Irish Rail currently has 29 of these trains operating in sets of four carriages, sourced from Spanish train builder CAF between 2002 and 2005.

The tender documentation says the acquisition of trains could be either through a lease agreement with a term of seven years or more, or through a straightforward purchase.

An industry source said it would be difficult to economically acquire previously used trains, given the Irish railway gauge is 1,600mm which was not found anywhere else other than Australia and Brazil.

The costs of modifying the trains for Irish tracks coupled with the need for safety certification could add costs and delays, the source said.

The 41 additional InterCity carriages are being sourced from Irish Rail’s existing supplier Hyundai Rotem of Korea.

InterCity is Irish Rail’s largest fleet with 234 carriages in service. Irish Rail said it did not have to go through a tendering process for these new carriages as the original tender in 2005 provided for a possible increase in the size of the order.