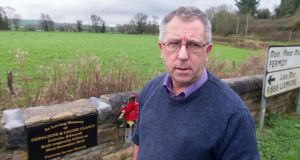 Noel Clancy at the spot where his wife and daughter were killed near Kilworth, Co Cork. Photograph: Michael Mac Sweeney/Provision

A widower who lost his wife and daughter in tragic circumstances when their car was hit by an unaccompanied learner driver has defended a hard-hitting Road Safety Authority ad on TV that he has made and insisted it was not about retribution but about highlighting changes in the law.

Noel Clancy (59) from Kilworth, north Cork, lost his wife, Geraldine (58), and daughter Louise (22) when their Ford Focus was struck by a car driven by an unaccompanied learner driver, their neighbour Susan Gleeson, then 20, at Ballyderown, Kilworth, on December 22nd, 2015.

Ms Gleeson was driving her father’s Opel Vectra when she collided with the Clancys’ car, flipping it on to its roof and through a hole in a stone wall before it ended up in a narrow canal-like drain. The Clancys drowned as rescuers could not open the car doors in time to get them out.

Ms Gleeson later pleaded guilty to dangerous driving causing the deaths of Mr Clancy’s wife and daughter, and she was given a three-year suspended jail sentence and banned from driving for 15 years by Judge Seán Ó Donnabháin at Cork Circuit Criminal Court in November 2016.

Mr Clancy, who joined in the attempted rescue of the victims without realising who they were, recently participated in an RSA ad for its Crashed Lives series, focusing on his own personal tragedy, where he speaks poignantly about how he didn’t recognise his wife and daughter as they were taken from the car.

“The undertaker asked me what coffin would we lower first. I told him we would lower Geraldine first and then place Louise back in her arms. I will never see my wife and daughter again,” says Mr Clancy in the ad, which has been broadcast on the main TV channels and screened in cinemas over Christmas.

It has generated a lot of debate locally and online. One Facebook user, Liam Evans, received a lot of support for a post where he described the minute-long RSA ad as “being in extremely bad taste”.

“While nobody disputes the fact this man suffered a massive loss, it was as a result of a terrible accident. The other driver has been convicted by the court and no doubt carries a huge burden of guilt. Is it fair that she must be repeatedly reminded by prime-time television. Will this save even one life? I doubt it.”

However, Mr Clancy said he made no apologies for the emotional nature of the ad, while stressing that his motivation was not to seek any retribution on Ms Gleeson but simply to highlight a recent change in the law that allowed gardaí to confiscate cars driven by unaccompanied learner drivers.

“The idea was that it would be hard-hitting. The director and the two researchers came down here and I said to them I wanted it to be as hard-hitting as possible. I didn’t want it to be some bland, in one ear, out the other ear job.”

“This was never about retribution,” he stressed. Rather, “I wanted parents and car owners especially to sit up and take notice of this ad.”

“It’s too late for me and my wife and daughter, but what I set out to do was try to spare other families the hell that was inflicted on our family.”

Mr Clancy said he found making the ad extremely harrowing as he returned to the scene of the crash near his home with gardaí controlling traffic as they did on the day of the tragedy. He conceded he found it difficult to watch the advert but said he was not aware of any local negativity in Kilworth to it.

In Kilworth village, locals were reluctant to speak on the record. Canon Donal Leahy declined to comment, saying he knew both Clancy and Gleeson families well. “This was a terrible tragedy and I’m certainly not going to get involved one way or another,” he said politely but firmly.

One woman, who didn’t wish to be named, said it was the intensely local nature of the tragedy with the Clancy and Gleeson families living less than 1km apart that added to the poignancy of the event, but she rejected any suggestion that the hard-hitting nature of the RSA ad had led to any split or divide in the community.

“It would be a lot easier for people to support the ad if it involved people from two different towns or counties, but it’s the fact that people know both sides and know that nothing was done deliberately or out of badness that has suddenly made it an issue and people are talking about it.

“It was a tragedy at every level for both families. I think everyone knows a vulnerable kid who learned to drive that way but there were endless coincidences that led to the tragedy and then for Noel to come upon it only added to the sadness of it, losing his wife and daughter,” she said.

“So I don’t think the community is split over this. I believe everyone wants to support everyone in this. It’s just it’s so close to us. To me there are other ads that are just as traumatic but we don’t know the people and the pain behind the tragedy whereas we do here and the ad reminds us of that.”