Temperature warnings in force amid heatwave 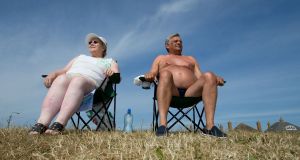 Weather notices warning of high temperatures and drought-like conditions are in place around the State as the heatwave continues.

Met Éireann put high temperature warnings in place for Munster and Leinster as temperatures rose to the mid-20s on Sunday. The highest temperature by 6pm was recorded in Moore Park, Co Cork, where it was 24 degrees, significantly lower than the 32 degrees reached last week.

Temperatures on western coasts only reached as high as 14 degrees in some places.

However, the forecaster has also said it expected the drought-like conditions to continue until at least next Friday night. “With little or no rain forecast for most areas over the coming week, drought or near-drought conditions are expected to develop more widely across Ireland, ” it said.

Met Éireann’s definition of a heatwave is five consecutive days of maximum temperatures of 25 degrees and over for a given location.

As a result, Irish Water will be enforcing a hosepipe ban in the greater Dublin area from Monday as it seeks to protect dwindling water supplies.

The demand for water has been outstripping supply in the Dublin area recently and the ban, set to continue for a month, applies to using water from the public supply for activities such as watering gardens, washing cars and filling pools. Those found to be flouting the ban are liable to be fined €125.

Met Éireann said that apart from the odd shower near the south coast on Monday there will be no break in the drought, and temperatures are again expected to hit 22 to 28 degrees in many areas.

For the rest of the week, Met Éireann said: “It will continue warm or very warm and mainly dry with just the odd shower for the rest of this week. There will be good sunshine but some cloudier periods as well and winds remain mostly light.”

The high temperatures continued to exacerbate gorse fires across many parts of the country on Sunday. In the east, gorse and grass fires spread across most counties with Dublin Fire Brigade responding to blazes in Kildare, Kilkenny, Longford, Louth, Meath, Westmeath, Offaly, Wicklow and Wexford. In Dublin, there were also fires in Balbriggan and Tallaght.

In Wicklow, fire service crews from Rathdrum, Tinahely and Wicklow were called to a gorse fire spreading through Coillte forestry on Sunday morning.

An Garda Síochána has called on pedestrians and motorists to use “extreme caution” in the area between the Sally Gap and Glencree due to poor visibility from forest fires.

A spokesman for Dublin Fire Brigade said all units were busy but that as long as “Dublin doesn’t go on fire” they would be able to respond to all fires. “It’s busy for now but you could get a lull. 1995 was the last time it was as bad as this but it’s only when Dalkey, Killiney and Howth go on fire that we become stretched. But they haven’t and people in those areas are doing what’s being asked to prevent fires.”

He reiterated the call for people to “keep vigilant” and to avoid using barbecues or any other type of cooking which requires an open flame. Smokers have also been reminded to take extra care not to leave cigarette buts in dry grass.

In Cork, the city fire brigade continued to respond to gorse fires following blazes in Whitechurch, the Old Mallow Road, Fairhill, Wilton, Knocknaheeney. They were also called to a shed fire in Togher and a car fire in Ballyvolane.

In Kerry, three units of the local fire rescue service were called to a gorse fire in the Kielduff area outside Tralee on Saturday after the blaze spread into a nearby forest.

The Department of Agriculture reissued a red “extreme fire risk warning” on Thursday which remains in place until midday on Monday. It advised “all outdoor use of fires, barbecues and other open ignition sources be avoided on forest lands and in other high risk areas until further notice”.

Extreme caution was also advised with respect to haymaking and the use of machinery and other agricultural activity.