Telegraph recovered from ‘Lusitania’ off coast of Cork 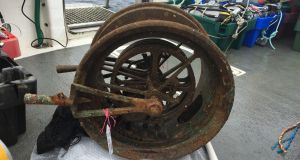 RMS Lusitania: the main ship’s telegraph has been recovered from the wreck site, off the Head of Kinsale. Photograph: Department of Heritage

Divers have recovered the telegraph from the Lusitania, which many had feared was lost after a failed recovery operation last year.

Divers had already located the ship’s main telegraph and marked its position on the seabed. On Monday they brought it to the surface under the supervision of an archaeologist from the National Monuments Service.

An attempt to raise it last year failed when the lift bag bringing it to the surface was punctured and the telegraph fell back to the seabed. That dive was criticised because it was carried out without the supervision of an archaeologist. This week’s operation followed consultations between the wreck’s owner and the Department of Heritage, of which the National Monuments Service is a part. The wreck is regarded as a war grave and is protected by an underwater heritage order.

The service’s principal officer, Terry Allen, said the telegraph was in excellent condition and had not been damaged by the previous attempt to salvage it. He said it was a docking telegraph used by the Lusitania when it was entering and leaving port and was one of the most important telegraphs on the ship. The bridge used it to tell the engine room how fast the ship should be moving.

But Mr Allen said that, contrary to some reports, the telegraph would not yield any clues about why the ship sank so fast.

The ship sank in just 18 minutes off the Old Head of Kinsale when it was hit by a torpedo fired by the German submarine U-20 on May 7th, 1915.

It sank with the loss of 1,198 lives, including 114 Americans. Although not directly responsible for the entry into the war of the United States, two years later, the sinking caused outrage in the US.

It contributed to a souring of the mood in the United States against Germany. Winston Churchill acknowledged the propaganda value of the sinking when he wrote in his diary: “The poor babies who perished in the ocean struck a blow at German power more deadly than could have been achieved by the sacrifice of 100,000 men.”

Mystery still surrounds a second explosion that occurred shortly after the torpedo struck. Some believe it was caused by munitions stored in the hull of the ship. But research in the United States suggests it was caused by a boiler; munitions would have been illegal under the wartime law of the sea.

The wreck’s owner, Gregg Bemis, said that the telegraph will be placed in the Lusitania museum planned for the Old Head of Kinsale.