Nearly every town now has its own craft brewery, says Minister for Justice Charlie Flanagan 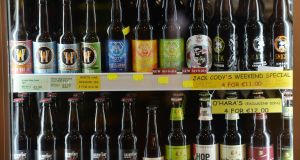 The licences will be subject to annual renewal and sales can only take place between 10am and 6pm daily. Photograph: Alan Betson

The so-called Craft Beer Bill allowing breweries and distilleries to sell alcohol produced on their premises to visitors will be progressed through the Oireachtas following a Cabinet decision on Wednesday.

Under current legislation, it is illegal for microbreweries to sell their products on site. Originating from a proposal by Labour TD Alan Kelly, the Intoxicating Liquor (Breweries and Distilleries) Bill 2016 will now allow for the sale of “intoxicating liquor” only to visitors who have completed a tour of the facility concerned.

“Allowing visitors who have completed a craft brewery or distillery tour to purchase alcohol product on the premises will add to the visitor experience. The Government amendments will ensure appropriate oversight on the sale of alcohol at such premises,” he said.

Under the draft legislation, operators of craft breweries and distilleries will have to apply to court for a certificate before a retail licence to sell alcohol produced on the premise can be granted by the Revenue Commissioners.

The licences will be subject to annual renewal and sales can only take place between 10am and 6pm daily.

“As was once the case many years ago, nearly every town now has its own craft brewery – such as 12 Acres and Ballykilcavan Brew in my own town of Portlaoise,” Mr Flanagan said.

“Some craft breweries and distilleries admit visitors for guided tours of their premises, which attracts tourists to the area and creates local employment opportunities. This also contributes to the local economy through increased demand for knock-on services such as accommodation, catering and transport.”

Mr Kelly said he welcomed the development, saying it is “a common sense piece of legislation which has been supported unanimously by Dáil Éireann”.

He said he looked forward to the draft legislation progressing quickly through the Houses of the Oireachtas after the summer recess and being made law in the coming months.

He said it would be preferable if the process was completed before the budget so it would be in place for the 2018 summer season.

There are believed to be 64 microbreweries in Ireland directly employing 439 people here.