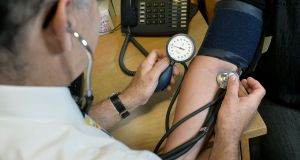 Medical bodies claim consultants appointed after October 2012 earn up to €50,000 less than longer-serving colleagues, and that this had led to health authorities being unable to fill about 500 full-time posts on a full-time basis. File photograph: Anthony Devlin/PA Wire

The Government will offer to end the lower pay system in place for hospital consultants appointed in recent years if they agree to treat only public patients, the Taoiseach Leo Varadkar has said.

Mr Varadkar said this would represent the first step towards disentangling the public-private mix in public hospitals, in line with the Sláintecare health reform programme.

The Taoiseach’s comments represented the clearest articulation of Government policy for dealing with the controversial two-tier pay system for senior doctors in public hospitals which medical bodies maintain has led to the shortage of specialists in many areas.

Highly-placed sources said on Wednesday night that the Taoiseach was setting out the direction of the Government’s thinking on the consultant pay issue.

Medical staff of all grades in hospital who are members of the Irish Medical Organisation (IMO) are currently balloting for strike action over the issue.

Medical bodies claim consultants appointed after October 2012 earn up to €50,000 less than longer-serving colleagues, and that this had led to health authorities being unable to fill about 500 posts on a full-time basis.

Minister for Health Simon Harris has held meetings with the IMO and the Irish Hospital Consultants Association on pay and reform issues in recent weeks. However, no real progress was reported from these talks.

Answering questions from Fianna Fáil leader Micheál Martin in the Dáil, Mr Varadkar said: “ I have discussed this as Taoiseach, working with the Ministers, deputies Donohoe and Harris, and we are willing to make an offer to consultants that we are willing to fully reverse pay inequality, but only for what are called type A posts (consultants with contracts to treat only public patients in public hospitals) . We want full pay equality for consultants, but only if they commit to working in the public service only. “

The Taoiseach’s proposal would be in line with a recommendation set out in the recent report of the review group on eliminating private medicine in public hospitals chaired by Donal de Buitléir.

It urged medical specialists be appointed in future under a new Sláintecare contract to treat public patients only. It also suggested that the 2012 pay cuts should also be ended for those already recruited on public-only contrracts.

The Taoiseach’s comments suggest that the lower pay rates for those appointed since October 2012 would remain in place for those who opted to retain existing rights to treat private patients.

The IMO and the IHCA on Wednesday again called for the end of the two-tier pay system. The IMO indicated it would discuss healthcare reform only once this had been ended for all.

The IMO said: “This is more spin from a Taoiseach who committed to equal pay for all when he was minister for health.

“The health services are struggling and waiting lists are out of control due to the fact that we have 500 vacant consultant posts, few or no applicants for posts and are losing more and more doctors to other health systems where they are valued and respected.

“The Taoiseach and Minister for Health must take responsibility for a Fine Gael policy that cut the pay of consultants appointed since 2012 by 30 per cent. No other public-service workers faced this kind of discrimination. The Taoiseach can’t now change the game by talking about resolving this awful discrimination for some consultants but not for others. “

The IHCA said the Government’s discrimination against consultants since October 2012 had resulted in one-in-five, or 500, permanent consultant posts being unfilled in public hospitals across Ireland.

“This has exacerbated the delays in providing care to patients and led to record waiting lists.”