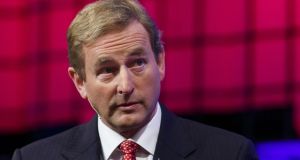 Taoiseach Enda Kenny has intervened in a last-ditch effort to prevent the Northern Executive and Assembly collapsing. Photograph: Getty 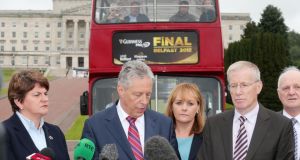 DUP leader and First Minister Peter Robinson along with party colleagues talk to the press at Carson’s statue in the Stormont estate in Belfast. Photograph: Jonathan Porter/PressEye

Taoiseach Enda Kenny has intervened in a last-ditch effort to prevent the Northern Executive and Assembly collapsing after First Minister Peter Robinson warned that Stormont could crash as early as Thursday because of the controversy over the status of the IRA.

Mr Kenny is holding an emergency meeting with SDLP leader Dr Alasdair McDonnell in Dublin on Thursday to try to persuade the party to support Mr Robinson’s call to adjourn the Assembly in order to facilitate fully concentrated talks on the key issues of the IRA and the welfare deadlock.

The indications from the SDLP were that it would oppose adjournment but Mr Kenny’s late-night intervention and the fact that he is meeting them on Thursday will put pressure on the party to alter its position.

Mr Robinson said the DUP would remove himself and his Ministers if the Assembly was not adjourned.

An emergency meeting of the Assembly business committee is on Thursday due to decide whether to adjourn the Assembly.

Responding to the arrests of Mr Storey and two other republicans, Brian Gillen and Eddie Copeland, in connection with the murder of Mr McGuigan, the DUP leader warned that Stormont could fold as early as Thursday if sittings were not adjourned.

Ulster Unionist Party leader Mike Nesbitt, who is engaged in a bitter inter-unionist battle with the DUP, indicated he would not support the motion while Sinn Féin Deputy First Minister Martin McGuinness also said they would oppose adjournment.

Mr McGuinness warned the British government that it would be a “grave mistake” to suspend the institutions.

The adjournment motion could be carried with the votes of the DUP and Alliance and with the SDLP supporting or abstaining in such a vote.

Without adjournment or suspension “Ministerial resignations will follow immediately”, said Mr Robinson. “The DUP has made it clear it will not be involved in business as usual. Other parties must now step up to the mark,” he added.

Various meetings were taking place late last night to see if a resolution could be found.

Mr Kenny discussed the crisis with Mr McGuinness by telephone on Wednesday while Minister for Foreign Affairs Charlie Flanagan said the collapse of the powersharing institutions would serve no useful purpose.

“I urge Northern Ireland’s political leaders to pull back from the brink,” he added.