Both Taoiseach Micheal Martin and British PM Boris Johnson have appealed for calm in Northern Ireland as rioting and violence escalated in recent days. Video: Reuters 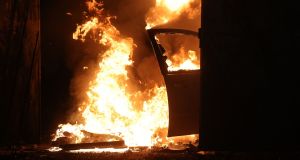 A car on fire at the Peace Gates in Lanark Way, Belfast, on Wednesday. Photograph: Liam McBurney/PA Wire 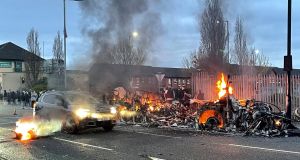 The wreckage of a bus on fire on the Shankill Road in Belfast. Photograph: Liam McBurney/PA Wire

Rioters have been blasted with a water cannon by police as unrest stirred on the streets of Northern Ireland again on Thursday night.

Stones and fireworks were thrown at police by gangs of youths gathered on the nationalist Springfield Road in Belfast close to where Wednesday night’s riots took place.

In a statement issued by Government Buildings afterwards, officials said the two men stressed that “violence is unacceptable” and “called for calm.”

“The way forward is through dialogue and working the institutions of the Good Friday Agreement,” they said.

The Sinn Féin leader Mary Lou McDonald has also sought a meeting with the Taoiseach to discuss the violence, principally in loyalist areas in the North, which has taken place every night this week.

The Biden administration also urged calm in Northern Ireland in the wake of several nights of violence.

She continued: “We remain steadfast supporters of a secure and prosperous Northern Ireland in which all communities have a voice and enjoy the gains of the hard-won peace. We welcome the provisions in both the EU-UK trade and cooperation agreement and the Northern Ireland protocol which help protect the gains of the Belfast/Good Friday Agreement.”

The British Secretary of State for Northern Ireland denounced as despicable adults encouraging children into “thuggery and hooliganism” that has marred the streets of the North over the past week.

Brandon Lewis said it was “pretty sad and pretty dreadful” to see children as young as 13 being goaded by much older people into charging sectarian flashpoints, where dozens have been injured by petrol bombs, bricks and bottles.

Criminal gangs and others are encouraging young people “to throw away their opportunities”, he said, after a sixth consecutive night of street violence linked to mounting loyalist tensions.

“Words fail me as to what goes on in an adult’s mind to encourage a 13 year old kid to behave that way,” he said, in a briefing with reporters after speaking to community, political and church leaders.

He also called on the Loyalist Communities Council (LCC), which represents the views of loyalist paramilitaries, to condemn the violence, which has so far left 55 police officers injured.

“We all have a duty to call that out, including the LCC,” he said.

“Those children and young people have a whole life ahead of them and shouldn’t be tarnished by doing something really stupid, some form of thuggery over these few days.”

Rejecting suggestions his Conservative government’s role in putting a border down the Irish Sea as part of the Brexit agreement was to blame, Mr Lewis said the cause of the disturbances, in Belfast, Derry and parts of Co Antrim, is “more complicated than any one particular issue.”

But he added that he “absolutely accepts there are some real challenges around the (Northern Ireland) protocol and how people in the unionist/loyalist community feel about the protocol, both in terms of its impact and their sense of identity.”

London and Brussels were continuing to negotiate over the “issues and challenges”, he said, adding: “We will get this sorted out.. we will do what we need to do to get the right outcome for the people of Northern Ireland.”

Mr Lewis also rounded on the rhetoric of politicians in the North who have “put messages out that can be interpreted in particular ways as having a bit of a spike to them and I don’t think there is any place for that.”

Violence is never a solution. I condemn the recent violent acts in Northern Ireland.

Full support for the authorities and political leaders in defusing tensions and restoring calm.

I have spoken with the Chief Constable as he briefs political parties. Thoughts are particularly with those officers injured by the unjustified & unjustifiable violence of recent days.Those responsible must be subject to the full rigour of the law.All must be equal under the law.

He said the North’s Chief Constable Simon Byrne has spoken with the LCC’s chairman David Campbell about the unrest, which escalated into more than 600 people present at rioting across a peace wall in west Belfast on Wednesday night.

“My message to the LCC would be the right thing to do is come out very clearly against violence,” he said.

In a joint statement after a special meeting of the powersharing Executive on Thursday, the Executive said it was “gravely concerned” by the ongoing violence.

“Attacks on police officers, public services and communities are deplorable and they must stop,” the statement said.

“Destruction, violence and the threat of violence are completely unacceptable and unjustifiable, no matter what concerns may exist in communities.

“Those who would seek to use and abuse our children and young people to carry out these attacks have no place in our society.”

Ministers said they were “all united in our support for law and order and we collectively state our support for policing and for the police officers who have been putting themselves in harm’s way to protect others.”

Deputy First Minister Michelle O’Neill said it was a “miracle” no one has been killed so far.

She said rioting at a sectarian flashpoint in west Belfast was “a very dangerous escalation of events”.

She was speaking just after the Executive was briefed by PSNI Chief Constable Simon Byrne on the violence in Belfast, Derry and Tyrone that has raged for more than a week, in which he confirmed 55 police officers have been injured.

Ms O’Neill said “nobody can fail to be alarmed by the fact” that some of the rioters are “children as young as 13”.

“It is not right, it is dangerous, it is unacceptable and it is a miracle that as we stand here today that no one has been killed,” she told the Stormont Assembly which was recalled for an emergency session on Thursday.

On Wednesday night a bus was hijacked and set on fire, a press photographer was assaulted and there were clashes between loyalists and nationalists at peace line street that links the Shankill Road with the Springfield Road in west Belfast.

PSNI Assistant Chief Constable Jonathan Roberts said, “The scale of the disorder last night was at a scale that we have not seen in recent years in Belfast or further afield.

“The fact that it was sectarian violence involving large groups on both sides is not something we have seen in recent years. We believe there was a level of pre-planning.”

He said there were upwards of 600 people present when petrol bombs, bottles, masonry and fireworks were hurled during the latest night of violence at the intersection of Lanark Way and West Circular Road in west Belfast.

“During this time officers came under constant attack,” he said.

“It is very lucky that no one was seriously injured given the large volume of petrol bombs that were thrown,” Mr Roberts said, adding: “Anyone who participates in such behaviour can expect to be arrested and remanded into custody and placed in the front of the courts.”

He said he could not confirm whether paramilitary groups were involved in the riots, saying the orchestration was subject to investigation.

“There were certainly people who took part in this who were not part of paramilitary groups, who were children and other adults,” he added. “I know what took place does not represent the wider community either.”

Mr Roberts confirmed six plastic bullets – known as attenuating energy projectile or AEPs – were fired by his officers during the “violent disorder”.

Eight officers were injured. Two men aged 18 and 28 have been arrested on suspicion of riotous behaviour.

An investigation has been launched into the assault of a press photographer by two masked men as well as criminal damage to his equipment. As well as a bus being hijacked and set ablaze, two motorists had their vehicles hijacked and burnt out.

“Whilst many of those involved in the disorder on Wednesday night were adults, it is clear there were many young people involved,” said Mr Roberts. “Young people were being encouraged to commit criminal acts by adults, who stood by clapping and encouraging the violence.”

Mr Roberts said those young people are risking their safety and also “risking their futures”, adding: “Today I am appealing to parents and guardians please speak to your children.

“To those community, civic and political leaders, please exert whatever influence you have to quell this disturbing, unnecessary and unwanted violence,” he said.

Ms O’Neill urged those who she said were organising young people to engage in violence to stop.

“We all know where that influence is coming from,” she said. “It is coming from illegal loyalist paramilitaries and criminal elements that are orchestrating this violence while they stand back and send youngsters out to do their bidding.

“These people are no role models for our youth. They are outdated, they are antiquated and they are caught in a time warp which has no bearing on where the vast majority of people across this society now are or where they want to be.

First Minister Arlene Foster, appearing by video link, told the Assembly that scenes of violence across the region are “totally unacceptable”.

“There can be no place in our society for violence or the threat of violence and it must stop,” she added.

“Injuries to frontline officers, victims terrorised, damage to people’s property, the harm to Northern Ireland’s image, in this our centenary year, has taken us backward.

“No brick, no bottle, no petrol bomb thrown has achieved or can ever achieve anything but destruction, harm and fear.”

Foster said the North was indebted to police officers standing “between order and those who prefer anarchy”.

Billy Hutchinson, leader of the Progressive Unionist Party, which has links to the Ulster Volunteer Force, said he had “no evidence” that the violence was being orchestrated by paramilitaries.

“If one person from a paramilitary organisation is in the middle of that, does it mean it is all paramilitaries,” he told BBC Radio Ulster.

Mr Hutchinson said mothers could be seen taking their children away from the riots. Other scenes show adults cheering on youngsters charging towards flash points.

Mr Hutchinson said he did not want young people involved in “any type of violence” but to wait for an opportunity for peaceful protest.

“I don’t want the young people taking on the problems of my generation, because they are not theirs,” he said. – Additional reporting PA