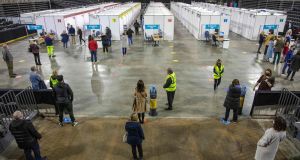 Members of the public wait to receive a dose of the AstraZeneca/Oxford vaccine at the SSE Arena in Belfast. File photograph: Paul Faith/AFP via Getty Images

European health ministers urged regulators to give them guidance on the use of the AstraZeneca vaccine at a virtual meeting held on Wednesday night.

European Medicines Agency chief Emer Cooke was urged by several ministers to provide them with more detailed guidance about whether use of the vaccine should be restricted, as some countries, including the UK, have done.

Minister for Health Stephen Donnelly was at the meeting and is expected to review the State’s position with the deputy chief medical officer Dr Ronan Glynn on Thursday.

On Wednesday, the EMA said there was a link between use of the AstraZeneca vaccine and “very rare” blood clots, but stopped short of saying that use of the vaccine should be restricted.

Ms Cooke is understood to have pushed back against ministers’ requests, indicating that member states have the scope to act themselves. She told the meeting that the EMA would continue to review the situation, though some ministers were reported to have been “angry” and “frustrated” at the lack of guidance from the EMA.

Vaccine experts in the Republic are expected to discuss the EMA findings today, but sources said they do not expect any changes to the use of the AstraZeneca shot to be announced today.

The National Immunisation Advisory Committee (Niac) is expected to meet today before issuing any advice to the Department of Health. None of the 66 cases examined by the EMA which gave rise to concern took place in Ireland.

The Health Products Regulatory Authority in Ireland said on Wednesday night it was reviewing reports of 18 blood clots or events possibly associated with blood clots as side-effects from the AstraZeneca jab out of more than 204,000 doses given so far in the State but “none are of the nature of the very rare blood clots of concern”.

The Health Service Executive is, for now, continuing with its planned rollout of AstraZeneca vaccines to people with underlying health conditions that put them at very high risk from Covid-19.

Any change in guidance would create further obstacles in the State’s protracted vaccine programme given that the AstraZeneca shot accounts for just over 20 per cent of the planned vaccine supplies to the State during the months of April, May and June.

The UK changed guidance over the use of the AstraZeneca vaccine, recommending that people aged under 30 should be given an alternative.

HPRA chief executive Dr Lorraine Nolan warned the public that if they do not get vaccinated they have “zero protection” against “this very devastating disease”.

Covid-19 itself is a disease that presents a risk of clotting, she told RTÉ radio’s Today show with Philip Boucher Hayes. Dr Nolan pointed out that all vaccines could cause side effects, the majority of which would be mild.

The side effects to watch out for that could indicate blood clotting difficulties included breathlessness, chest pain, swelling in the leg, bruising, neurological issues and worsening headache, she said.

Dr Nolan explained that the EMA had been reviewing the issue of blood clotting in a small number of cases and had found that it was not possible to rule out a link and had committed to review that issue. They have now said that a link to the vaccine is considered plausible in the context of these rare events.

“They are unusual and they are very rare.”

The product information for AstraZeneca will be updated to reflect these rare side effects and the unusual nature of these blood clotting events, she added. “We are talking about 86 cases in 25 million vaccines.”

Dr Nolan said the EMA position remained that AstraZeneca was “a very safe and a very effective vaccine” and that any blood clotting incidents were still considered very rare.

“When we talk about risks it’s very easy to forget about the overwhelming benefits of vaccination and that is what we have to keep in mind here.

“At this point, given the very low numbers, they haven’t been able to pull out specific risk factors such as gender, age – they are clear that in the cases that have been observed there is a higher prevalence among women.

Dr Mary Favier, former president of the Irish College of General Practitioners and member of the National Public Health Emergency Team, has encouraged anyone due to receive the AstraZeneca vaccine to keep their appointment as the risk of blood clots was “truly tiny” compared to the risks from Covid-19.

Dr Favier said the risk of clots from a long-haul flight were “way higher” than those associated with the vaccine. “We balance those risks,” she told Newstalk Breakfast.

She said it was “hands down” it was safer to take the vaccine than risk Covid-19.

There was “a remote possibility” that AstraZeneca would not be approved for young women at a later stage, she said. However, by the time that cohort would be eligible for vaccination in Ireland, it would be late summer and much more would be known, she said.