GPs being placed under severe stress due to vaccine rollout issues 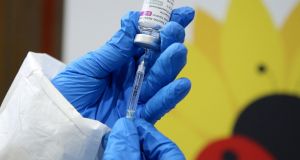 One GP says he is suspending the vaccination programme at his surgery after receiving abuse from some patients. Photograph: Gent Shkullaku/AFP via Getty Images

Doctors in general practice have been placed under severe stress due to problems in ascertaining when and how many vaccines they will get for patients, the chairman of the Irish Medical Organisation’s GP committee has said.

Dr Denis McCauley said doctors were now anticipating a much improved framework for administering doses to patients from April 12th, with better communication, more certainty of supply and larger allocations of vaccines.

He was speaking after the HSE moved to assure GPs they would each be told this week of the numbers of allocations they would get from April 12th, onwards, and would each be provided with a relationship manager, as well as a dedicated email and phone number to assist with any concerns or issues that might arise in the process.

This followed mounting frustration with the rollout of the vaccination programme among GPs, some of whom have said they have been abused by patients, following lower than expected numbers of jabs arriving.

Some practitioners, including Co Limerick GP Kieran Murphy, say they will not participate in the next phase of the vaccine rollout because of intimidating calls from people complaining that they or their relatives did not receive the vaccine. He said his staff had taken as much as they could so they were going to stop providing vaccines.

Dr McCauley said there had been essentially three problems with the roll out of vaccines to the over 70s.

The first was that some GPs did not know if they were among the practices selected to distribute the vaccine and there seemed to be a lack of communication on the issue. The second was when there were shortages of some vaccines and patients were “unfortunately ringing practice staff and expressing their frustration”. The third, he said, was simply the “cock up” problem when promised numbers of vaccines did not arrive, leaving GPs to explain this to patients.

He said GPs have been incredibly busy and were working under very stressful conditions. However, he noted the great achievement of a million doses having been administered as of Thursday.

In the future, he said, the level of engagement by GPs with the vaccine rollout would diminish as regional mass vaccination centres opened.

“Today is a good news day,” he said. “We didn’t get a St Patrick’s day bounce in the numbers of people with Covid-19, and I hope we will not get an Easter bounce. There are millions of vaccines coming, 3.5 million in June, the numbers in hospitals and ICU are down and there could be light at the end of this”.

He said the Covid environment has been “highly stressful” but he hoped to be able to look back on this time with pride.

In a response to queries from The Irish Times, the HSE said “regrettably, vaccine allocation remains limited by supply.

“This is due to higher numbers in the age group [currently being vaccinated] and limited volumes available for allocation.”

But the HSE said said based on supply forecasts, “we expect to be able to increase the dose 1 allocation to GPs from the week beginning April 12th.”