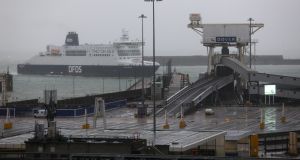 A ferry arrives at the Port of Dover in England on Monday. Photograph: Chris Ratcliffe/Bloomberg

Goods should be transported to and from Europe on direct ferries “for the foreseeable future” to avoid Covid-19 and Brexit delays in Britain, Minister for Foreign Affairs Simon Coveney said.

As Irish lorry drivers remained stuck in long queues of traffic in Britain for a second day, Mr Coveney said that the disruption experienced on roads to sea ports in southern England would continue for weeks to come with Brexit taking effect on January 1st and new border checks.

“There is going to be a period of time for some weeks now, where there’s going to be a lot of disruption, and a lot of uncertainty around timelines and queuing,” he told The Irish Times.

With expected delays on English Channel ferries and particularly on the key Dover-Calais sea route used by Irish importers and exporters, Mr Coveney said that businesses looking for certain deliveries in the coming weeks should “shift their focus, for now, away from the landbridge.”

“If people are looking for certainty, then direct ferry routes give them that,” he said.

Haulage industry concerns about a shortage of capacity for lorry drivers on direct ferry routes would be addressed quickly by shipping companies because if there is a “dramatic reduction” in landbridge traffic, ferries on the Irish Sea would be switched to the direct routes, he said.

“This is a very dynamic space. We have seen a very significant increase in capacity over a short space of time, the last six months, and we are likely to see that continue into next year,” he said.

Brittany Ferries was “planning to significantly ramp up” capacity on ferry routes between Ireland and France, he said, following moves by shipping companies Stena Line and DFDS to put on additional ferries and open new direct services to accommodate displaced landbridge traffic.

A spokesman for the French shipping company said that it had “no immediate plans” to change its fleet deployment from Irish ports “but will continue to monitor the situation.”

Mr Coveney said that Irish businesses needed to be “realistic” and there was “no way” Irish trucks carrying fresh fish were “simply going to be able to skip queues” at UK ports.

“Ireland cannot control what happens in British ports,” he said.

Streamlined supply chains through Britain would, in the short term, be “significantly disrupted” and firms should take “slightly longer” direct routes, which will be “significantly quicker” as they will avoid border checks, bureaucracy, paperwork and delays, he said.

Minister for Transport Eamon Ryan urged people not to panic about shortages of supplies due to the effective closure of the British landbridge due to Covid-19 delays.

Mr Ryan said large ferries were continuing to sail to Irish ports from Britain where the State sources much of its distribution for supplies in Ireland, he said.

France’s ban on freight traffic from Britain on Sunday to prevent the spread of a new Covid-19 strain left up to 250 Irish lorry drivers stranded in Britain en route to continental Europe and disrupted supply chains for Irish firms transporting goods to and from mainland EU states.

“We will continue to work with both the UK and French governments to make sure our truckers get home safe and can deliver goods in a way that is safe for them,” Mr Ryan said.

The Minister said he told his French counterpart Jean-Baptiste Djebbari in a telephone conversation that Irish haulage businesses have been able to manage operations safely throughout the Covid-19 pandemic and they were “not a source of transmission” of the disease.

“That has been the case of the last nine months and I am sure we can continue that – it is a well-protected area,” he said.