Swiss authorities liaising with family of woman killed in storm 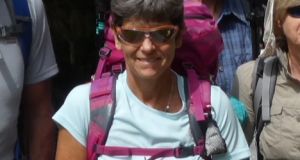 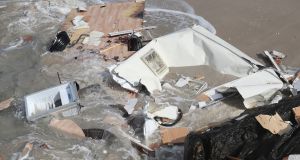 The scene in Claddaghduff, near Clifden in Co Galway, where Elvira Ferraii died. Some of the debris from the caravan was swept several miles out to sea in strong currents. Photograph: Niall Carson/PA Wire

Swiss authorities are liaising with the family of Elvira Ferraii, who died when the caravan in which she was staying was overturned and swept towards the sea by Storm Ali early on Wednesday in north Connemara.

The Swiss Embassy in London has confirmed that it has been in touch with the family of Ms Ferraii and the Irish authorities.

The separated mother of three worked in the health service and lived in Steinmaur in the canton of Zurich. Her two grown-up sons live in Switzerland and her daughter lives in Austria.

She had left for Ireland last month to study English, after recently completing a seven-day hiking trip in Switzerland with friends.

She had planned a three-day trip to Connemara early this week, and it is understood that she booked into the Clifden Eco Beach Camping and Caravan Park just the day before her death.

Gardaí in Clifden have begun interviewing witnesses who saw the incident occur close to Claddaghduff during violent storm force 11 winds which reached 143km an hour at Mace Head in Connemara.

Ms Ferraii’s body was found outside the caravan after it hurtled down a ledge onto the tideline at the Clifden Eco Beach Camping and Caravan Park at around 7.45am.

Post-mortem results are expected to take some time, but early indications are that she may have sustained fatal injuries and was thrown out of the caravan.

Emergency services, including the Irish Coast Guard Cleggan unit, gardaí and local fire service personnel, were at the scene within minutes and recovered her body, but conditions were too hazardous to retrieve the caravan which broke up within several hours in a combination of wind and Atlantic swell.

Debris from the caravan was scattered, and some was swept several miles out to sea in strong currents.

“People in the area are used to tourists coming and are very welcoming, and they are very, very shocked,” Mr Ó Tuairisg said. “On behalf of the council and the community, I wish to extend sincere sympathies to Ms Ferraii’s family.”

Meanwhile, tributes have been paid to a man who died when a tree fell on him in south Armagh during Storm Ali.

Matthew Campbell, a contractor for Northern Ireland Water in his 20s, was in Slieve Gullion Forest Park when the accident occurred.

Another man, believed to be in his 40s, was injured and is being treated in hospital in Belfast.

Mr Campbell’s former principal at Royal Belfast Academical Institute, speaking to the BBC, described him as a “genuine and thoroughly decent young man” whose life “ended far too soon”.

“Matthew loved Inst and he embraced its spirit of being involved, of engaging in his learning and of supporting others,” Janet Williamson said.