Child surgery waiting lists for scoliosis ‘an exercise in manipulation’

‘Children in pain today, in pain tomorrow and in pain until this surgery provided’ 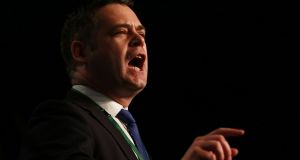 Hospital waiting lists for children requiring spinal surgery are “an exercise in manipulation”, the Dáil has heard.

Sinn Féin deputy leader Pearse Doherty said children were waiting up to 18 months for surgery for scoliosis, curvature of the spine.

The issue has been raised repeatedly in the Dáil and Mr Doherty highlighted the case of a 12-year-old child Sophia McGuinness who has scoliosis and cerebral palsy and whose father sought a meeting with Minister for Health Simon Harris and travelled to Leinster House.

Calling on Tánaiste Simon Coveney to ensure that a meeting would be arranged with the Minister, Mr Doherty said children were being treated disgracefully and their parents were exhausted from having to battle “day in and day out” for their children who are “in pain today, in pain tomorrow and in pain until this surgery is provided”

He said Mr Harris had made promises that had been repeatedly been broken for the 189 children waiting for scoliosis surgery.

Mr Coveney said he had met Sophia’s father and understood fully the problems involved and the family’s distress. Tackling the issue was a priority for the Government and it was allocating an extra €9 million for paediatric othopaediatric surgery and putting in a sustainable system of scoliosis treatment.

Fianna Fáil deputy leader Dara Calleary said 25 children with spinal muscular atrophy, which was “as bad as it gets” could get treatment through the drug Spinraza but it was not available in Ireland.

He pointed out that Mr Harris was involved in a new drug-purchasing alliance with Austria, Belgium, Luxemburg and the Netherlands to get drugs at a better price. All four of those countries provided the drug but not Ireland.

“I need an answer as quickly as possible because these children don’t have the time to wait,” Mr Calleary said.

The Tánaiste said the Government and the minister were “very keen to ensure the reimbursement for the right drug at the right price”, and they were continuing to work on issues of access to these expensive new drugs.