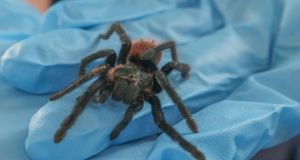 Red-rump tarantulas are famous for their bite, but it is not considered dangerous to humans in general. Photograph: The Irish Times

A tarantula discovered in a bag of bananas in a Co Donegal shop is “almost certainly” a young male and not a pregnant female, according to the Irish Society for Prevention of Cruelty to Animals (ISPCA).

The stowaway was found in a bunch of wrapped bananas from central America at the local supermarket.

The ISPCA are not saying where exactly the bananas were purchased. A spokeswoman said the venomous creature which can kill a human – but usually doesn’t – is now residing at the Donegal Animal Rehabilitation Centre near Ramelton.

According to the ISPCA, care assistant Leela Voss was among the first on the scene and is, fortunately, experienced in handling exotic animals. Ms Voss assisted the shopper whom the ISPCA described as “somewhat surprised” at discovering the small tarantula.

The tarantula, later named Parker, was identified as a Mexican red rump. It is is about four months old.

“Once this little guy matures to adulthood, it can be determined whether it is actually a male or female,” said an ISPCA spokeswoman.

The issue of the tarantula’s age and gender may be significant as female red-rump tarantulas tend to have 300 young at a time. And they tend also to be fatherless as the mothers like to eat the fathers following sex.

While generally considered a docile species, the red-rump tarantula, when threatened, will defend itself with hairs located on its abdomen which some species can flick at an attacker using the hind legs.

If these hairs get on a human’s skin it can feel itchy like scratches from bits of fibreglass. It becomes more serious if the hairs get into mucus membranes, especially the eyes, where serious damage can result.

A female tarantula can live 30 years or longer in the wild giving birth to tens of thousands of offspring.They hunt on their feet and don’t catch their prey through webs. They eat a lot of insects but will hunt mice, frogs and even birds by paralysing their prey with venom. They sneak up on small prey at night and pounce.

Parker’s family of red-rump tarantulas are quite famous for their bite, but it is not considered dangerous to humans – unless an allergic shock occurs, which can be fatal.

ISPCA centre manager Denise McCausland said Parker was carefully captured and transferred in a secure box before being admitted and given a veterinary examination which confirmed he was dehydrated and lethargic after his travels.

After some water and mini-crickets to eat he began to perk up quickly, said the ISPCA.

Now already growing in size, he is continuously spinning elaborate webs all around his enclosure. Ms McCausland said: “Parker is thriving well, his previous fuzz of hair is thickening well as he grows. This is a vulnerable time for tarantulas as his new exoskeleton has to harden in the coming days and weeks so we are being extra careful. Parker will be transferred to Alcorn’s Tropical World nearby where his permanent home awaits. There Parker can live the solitary life he requires in a purpose built vivarium fit for a spider prince or princess.”