‘I like it here, but I kind of stay in at night:’ Female students say Dublin city ‘dangerous’ 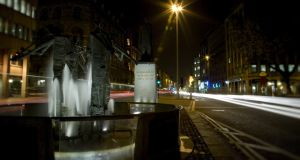 Brazilian student Stefano (29) said there were usually people on the boardwalks of the River Liffey who might be trouble. Photograph: Getty Images

International students studying English in Ireland have expressed concern about the city centre’s safety, following the news that gardaí are investigating the rape of an 18-year old Spanish student in Dublin on Saturday.

Jane Wanj is a Brazilian foreign student in her late teens studying English in Dublin this summer.

She said she was afraid to stay out late in Dublin: “at night it is quite dangerous. A lot of people drinking, shouting.”

Jane is from São Paulo, Brazil, and has been taking English language classes at the Ibat summer college in Temple Bar.

She has been studying in Dublin for just over a month, and lives in Summer Hill in the North Inner City.

She explained that she has had unpleasant experiences with people who are drunk or intoxicated on drugs late at night, but also early in the morning in Temple Bar on her way to college.

Stefano (29) was another Brazilian student studying at the Ibat English language college. Stefano said he has never had a problem with Dublin at night, “for me it is fine. I don’t know, it is probably different for girls” he said.

He said there were usually people on the boardwalks of the River Liffey who might be trouble, or people drinking alcohol in the streets of Temple Bar, but he avoided them.

“I used to go out many times during the week or weekend, but I never had a problem” he said.

Jaeher Lee (23) is a summer student from South Korea learning English in Dublin, she also said she does not feel safe in the city late at night.

“I think it is a little bit scary, especially at night” she said.

Jaeher is attending the ISI English language school located off Capel St in the city centre.

She said that many of her friends have experienced cat calling or shouting from strangers in the city centre.

“I like it here, but I kind of stay in at night” she said.

Keith, a young worker in the Ashfield travel hostel on D’Olier St said he advises backpackers or students to be wary of the Temple Bar area in Dublin late at night.

He said he mainly warns tourists or travellers to be aware of pickpockets, but also to be cautious in town late at night.