Review of McCabe abuse claims recommended due to ‘media maelstrom’ 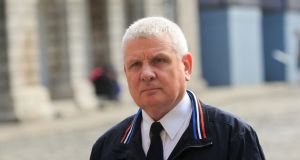 A Garda superintendent recommended that a 2006 child sex abuse investigation into Sgt Maurice McCabe be reviewed in 2014 because of the “media maelstrom” around him.

Supt Leo McGinn told the Disclosures Tribunal he took up duties in Bailieboro in May 2013 and it “came to his ears” that the sex abuse allegation had been investigated by a local officer and that people thought it would have been better if it was led by someone outside the division.

He said that when he received a notification from the child and family agency Tusla, on May 7th, 2014, that a woman known as ‘Ms D’ had made an allegation to counsellor Laura Brophy about Sgt McCabe, he decided that the original investigation should be reviewed.

An administrative error had caused Ms Brophy to wrongly include an allegation of digital rape against Sgt McCabe, whereas in fact the allegation involved what tribunal counsel has referred to as “horseplay” and had led to a decision of the DPP that no charges should be brought.

Supt McGinn initially did not know that the 2013 allegation was different to the original one. Responding to Diarmuid McGuinness SC, for the tribunal, Supt McGinn said he wrote a note on the same day he received the notification to Chief Supt James Sheridan.

In the note he recommended that a review be conducted by someone outside the Cavan-Monaghan division. He said it was his view that sensitive cases like the one involving Sgt McCabe and the complainant, who was the daughter of a Garda colleague of the sergeant’s, should be dealt with outside the division.

The tribunal, chaired by Mr Justice Peter Charleton, is investigating whether senior Garda management directed that a smear campaign be conducted against Sgt McCabe.

Supt McGinn said that at the time the Seán Guerin report into the McCabe controversy was ongoing and that if there was to be a “tribunal down the road”, it would be good if all matters concerning the Garda had been reviewed.

In that way, it could at least be said that “eyes other than the Cavan-Monaghan Division” had looked at the matter.

On the day the referral was received, the then minister for justice Alan Shatter had resigned, for reasons linked to the Guerin report, which would be published two days’ later.

Given the “media maelstrom” that was occurring, he thought it best if all matters with potential questions for the Garda be reviewed. Asked if he thought his decision was not premature, given that he knew very little about the 2006 inquiry, he said the decision on whether to act on his recommendation would rest at commissioner level.

He told Michael McDowell SC, for Sgt McCabe, that he did not think there was any reason to contact Supt Noel Cunningham, who had conducted the 2006 inquiry, before making his recommendation.

Asked by Mr McGuinness if he had any “axe to grind” against Sgt McCabe, Supt McGinn said “absolutely not. I never met the man.”

He said he took no directions from anyone before writing his recommendation. He told Mr McGuinness that he thought it was the day afterwards that he showed the notification to the complainant’s father, ‘Mr D’. “I think he said he would have to check this.”

‘Mr D’ had already told the tribunal that he was shocked when he read the report and feared that the rape had actually happened and his daughter had not told him.

Supt McGinn said ‘Mr D’ later told him that there was an error in the report and there had been no allegation of digital rape. The witness said that he “used an expletive and said I would ring the HSE.”

The tribunal heard that Chief Supt Sheridan had read the ‘Ms D’ file as part of his dealings with the Guerin inquiry and was familiar with the nature of the original allegation.

On May 22nd, the chief superintendent wrote a letter to Assistant Commissioner Kieran Kenny, copied to Supt McGinn, in which he said the May 7th referral contained incorrect information and that the corrected version contained no new information and therefore did not require any further action.