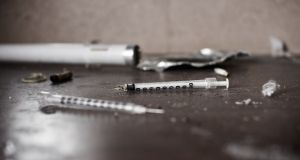 Radical and effective strategies to tackle drug abuse must come from within communities and not government-appointed panels, a Cork dissident republican told a protest march against heroin dealing in the city.

Chairman of the Cork Branch of the 32 County Sovereignty Movement, John Murphy, told around 100 people in Knocknaheeny, on Cork’s northside, that communities must be the starting point for any debate on how to tackle the scourge of drugs.

Friday's protest, organised by the 32 County Sovereignty Movement and closely monitored by gardaí saw the campaigners march from Baker’s Road along Harbour View Road in Knocknaheeny, led by a drummer and men carrying a black coffin symbolising the deaths from drug abuse in Cork.

The protestors, some of whom carried 32 County Sovereignty Movement flags – a group linked to the Real IRA – marched along Harbour View Road far as St Mary’s on the Hill Church in Knocknaheeny where Mr Murphy accused the State of being in denial since the 1980s about the extent of the heroin problem.

“When community workers were crying out about the epidemic in inner city areas (in the 1980s), the then Minister for Health, Barry Desmond, declared that no such epidemic existed. This was the disastrous and myopic response of official Ireland, ” said Mr Murphy.

“Communities themselves were forced into direct action against the pushers and official Ireland’s response to that was to set aside more resources investigating the Concerned Parents Movement than those employed against the heroin dealers.

“And whilst the conflict between the community and official efforts is not as acute as in those times, it remains a salient point that radical and effective initiatives and strategies to tackle drug abuse will come from communities and not some government-appointed panel.”

Mr Murphy said that drug abuse was no respecter of age, gender, social status or geographic location and there were rich heroin addicts as well as poor heroin addicts, but the problem was multi-faceted and any solution must be similarly multi-faceted.

Mr Murphy pledged the 32 County Sovereignty Movement would be the first to come out and stand with other local communities in Cork in their struggle against drug dealing and he had no doubt but that other communities in the city would take a similar stand against the scourge of heroin.

In May 2015, then Cork City Coroner, Dr Myra Cullinane told a Cork City Joint Policing Committee meeting that the majority of the 87 heroin related deaths recorded in the city over the previous decade were caused by users taking the opiate with other drugs such as valium and xanax.

Det Sgt Sean McCarthy of Cork City Divisional Drugs Squad told the same meeting that heroin first began to manifest itself in Cork in the mid-2000s when the number of seizures went from 9 in 2005 to 77 in 2006 and between 2010 and 2014, it accounted for 10pc of drug seizures in the city.