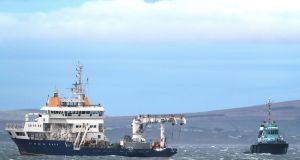 The Granuaile arrives back into Blacksod, Co Mayo, with wreckage from Coastguard helicopter Rescue 116 onboard. Photograph: Brian Lawless/PA Wire

The sweep, which has been planned by three fishing industry organisations in response to an appeal by Mr Smith’s sister, Orla, fanned out from the crash location at Blackrock island, 13km west of the north Mayo coast, early on Saturday morning.

A group of over 70 divers who are trained in search and recovery have launched 18 ribs to assist, as part of an agreement between the Irish Underwater Council and Irish Coast Guard.

Fishing vessels from and in the sea area were involved in the initial alert after the Sikorsky S-92 helicopter was reported missing, and local fishermen assisted in finding the black box signal and undertook a detailed search of the Inishkea islands to the north.

However, this concerted effort by large Killybegs vessels and smaller inshore craft follows confirmation last weekend that there was no sign of the two missing men under helicopter wreckage lifted from the seabed at a depth of 40m.

RNLI lifeboats from Ballyglass and Achill in Co Mayo, Sligo, Bundoran and Arranmore, Co Donegal, along with Killybegs and Killala Coast Guard, will be on scene for the day and will keep in communication with all vessels, according to the RNLI.

It has stressed its lifeboats will remain on call and be available to respond to emergencies elsewhere.

The Marine Institute’s remotely operated vehicle (ROV) Holland 1 is undertaking further sub-sea searches of the crash location over the weekend, he said.

It is being deployed from the Irish Lights ship Granuaile, with support from the Air Accident Investigation Unit (AAIU) and An Garda Síochána.

A specialised sonar has been fitted to the ROV, controlled by a Marine Institute team led by senior ROV pilot Paddy O’Driscoll and involving contractors from Ireland and Britain.

“We have had a massive response,” Supt Tony Healy of Belmullet gardaí said, commenting on the impact of Ms Smith’s appeal last Monday.

It is now over three-and-a-half weeks since her brother and colleague Paul Ormsby went missing.

A stretch of coastline from Co Donegal to Co Mayo has been divided into a number of search areas for today’s effort, each under the direction of an Irish Coast Guard or RNLI lifeboat asset.

Malin Coast Guard marine rescue co-ordination centre (MRCC) and the Naval Service ship LÉ Ciara are assisting with co-ordination, and the Irish Coast Guard has reiterated the importance of basic safety by all participants, afloat or ashore.

It has appealed to vessels at sea which are not involved in the search to keep a good look-out for any material which may be associated with Rescue 116, and report any finds to Malin Head Coast Guard MRCC.

The Killybegs Fishermen’s Organisation, Irish Fish Producers’ Organisation and Erris Inshore Fishermen’s Association have emphasised that safety must be paramount in their support for the effort.

The AAIU preliminary report is expected to be published shortly. It has ruled out mechanical anomalies in the aircraft before the crash, following an initial analysis of black box flight data.

Wreckage from the helicopter lifted from the seabed last Sunday has been transported to the AAIU facility in Gormanston, Co Meath.