Stormont negotiations to resume in September 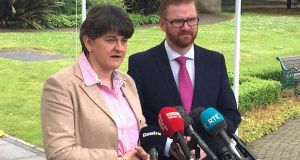 Intensive efforts to restore the Northern Executive and Assembly came crashing down at lunchtime on Tuesday when it was acknowledged the latest round of Stormont talks were doomed to failure.

Talks are now to be “parked” during the summer, although it is expected some low-level discussions between the five main parties will continue during July and August ahead of another concerted push in September to restore devolution.

The fact that northern secretary James Brokenshire on Monday allowed the talks to continue until the end of this week raised some initial minor hope that the DUP and Sinn Féin might compromise on key issues, primarily the Irish language, notwithstanding the mood among the parties at Stormont being pessimistic.

The decision of Minister for Foreign Affairs Simon Coveney to join Mr Brokenshire for further talks on Tuesday morning also appeared to indicate a deal might still be possible on issues such as an Irish language Act, dealing with the past and same-sex marriage.

But by lunchtime, Sinn Féin sources were briefing that the British and Irish governments were about to suspend the negotiations with a view to the parties returning to talks in September. This was the fifth deadline that was passed since Stormont collapsed at the start of the year.

This was formally confirmed later in the evening by Mr Coveney and Mr Brokenshire. “Following discussions with the two largest parties and with the Irish Government this morning, it is clear that these issues cannot be resolved quickly enough to enable an executive to be formed in the immediate term,” said Mr Brokenshire.

Said an equally deflated Mr Coveney, “In the final analysis, it is only the parties themselves that can make an agreement with each other.”

The two said they remained “steadfast” in their commitment ultimately to see a deal.

With the failure of the talks, Mr Brokenshire had three options: to call Assembly elections, introduce direct rule from Westminster or extend the talks. He decided on the latter.

Civil servants have been in charge in Northern Ireland since January when the late Martin McGuinness resigned as deputy first minister over the Renewable Heat Incentive scheme debacle, although up until the Assembly elections of March the executive ministers had some circumscribed powers.

While Mr Brokenshire so far has shied away from bringing in direct rule, he nonetheless may be obliged to introduce legislation at Westminster to allow the civil servants have sufficient finances to pay for services.

He indicated as much when he said, “I will reflect carefully in the coming days on any further steps which may be required to support the continued effective provision of public services in Northern Ireland.”