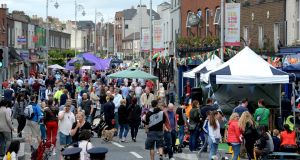 Dublin’s Stoneybatter has been named the coolest place in Ireland and among the top 50 most exciting neighbourhoods in the world by Time Out, which has just published its annual hit list of happening places.

The magazine draws on both a survey of more than 27,000 people globally who were asked to name the best and most underrated neighbourhoods in their city and the knowledge of local Time Out editors and writers.

Stoneybatter comes in at number 42 on the new list having leap-frogged its formerly cool neighbour Phibsborough which featured prominently on last year’s list.

“There’s nothing new about Stoneybatter itself with its red-brick terraced houses and the regular clop of a horse and cart still heard on the road, this village-in-the-city has long been one of Dublin’s favourite districts,” says Time Out.

This is something of an understatement given that the village was among the first places settled by the Vikings more than 1,000 years ago.

The guide says that the past year has seen “a string of great new openings, from vegan cafes to hot new bars, challenging other neighbourhoods vying for the crown”.

Over the last two years, two sushi bars and three vegan restaurants have opened in the village as well as several cafes, gift shops and pubs.

The guide hails Stoneybatter for having “stood the test of time” and says it is “one of the most central places where young people can still afford to live (just), and the neighbourhood pride is strong - visit during the village festival and you’ll see what we mean”.

The fairly recently opened Italian restaurant Grano is praised for its “top-notch Calabrian cuisine with pasta made right in front of your eyes”, while the also fairly recently re-opened Belfry pub is described as a place where “you’ll always find a crowd, most of whom spill out into the yard with a glass of the bar’s own barrel-aged cocktails”.

Visitors are encouraged to check out the nearby Collins Barracks museum and advised to stay in the - also recently opened - Hendrick Smithfield hotel.

When locals were asked to give their view of their neighbourhood, one is quoted as saying Stoneybatter is “the go-to spot for new eateries, and its local pubs and rock bars are the city’s hidden gems. Plus it’s not very touristy, which is nice”.

In the international league table, Arroios in Lisbon was revealed as the world’s coolest neighbourhood followed by Shimokitazawa in Tokyo, Onikan in Lagos, Wedding in Berlin and Filipinotown in Los Angeles.

Arroios is described as a “multicultural hub where street art meets food from around the world”.

“With a legacy of countercultural cool and a whole lot of underground cred, Shimokitazawais known for its vintage and consignment shops, independent restaurants, cafés and bars, often frequented by Tokyo’s creative set,” the guide says.

And when describing Onikan it says “creatives have been flocking to the historic district of Lagos in search of authentic surroundings, adding workspaces, galleries and bars to its eclectic mix of architecture.”