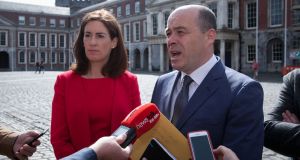 The Government is to appoint a “new agent” to collect television licence fees in an attempt recoup some of the estimated €40 million a year that is currently going unpaid, Minister for Communications Denis Naughten has said.

The rate of licence evasion in the State is some 14 per cent at present and a public tender competition is to be held to find a new collector in an attempt to improve the funding of public service broadcasting.

The licence is currently collected by An Post, which the Department of Communications said had been made aware of the Minister’s intentions. It is unclear what role, if any, An Post will have in the process in future.

Speaking at the opening of a forum on the future of public service broadcasting in Dublin Castle on Friday, Mr Naughten said giving responsibility for the licence fee collection to an agency had been done in Britain where it successfully drove down evasion rates.

Mr Naughten said he had sent legislative proposals on appointing a new collection agent to the Oireachtas Committee on Communications Climate Action and Environment, which are to be considered by the committee next week.

The Broadcasting Forum, which was hosted by the committee on Friday, heard current funding models for public service broadcasting were not sustainable.

The forum was made up of a number of academics, journalists and broadcasters who spend the day considering questions on the nature and content of public service broadcasting as well as its ongoing funding.

In his remarks, Mr Naughten said while he looked forward to the forum’s conclusions in due course, “given the real and urgent pressures faced by public service broadcasters, my priority has been to bring forward amendments to the existing regime”.

He said it was “realistic”to believe that amendments to the existing TV licence regime provided “the best chance of stabilising funding in the short term”.

“I believe that the licence fee remains the most appropriate way of funding these services – for now at least. Obviously, there are issues. Evasion is high and the existing licence doesn’t take account of the new ways audiences are choosing to access public service media.”

The Minister also said the Broadcasting Authority of Ireland would in future be allocated money from the TV licence fund to cover its own administration, which in turn would allow the authority to reduce demands on current funders, particularly in the local, commercial and community broadcasting sector.

He said the Government had approved a new scheme in which the broadcasting authority would provide bursaries to journalists working in local or community radio stations where their work demonstrated “a real public service value”.

She said one of the issues was that many broadcasting outlets outside of the public service broadcasters “provide what could be described as a public service and yet those outlets receive no funding for doing so”.