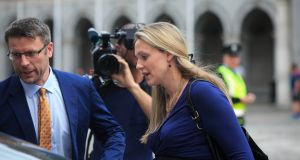 Psychologist and counsellor Laura Brophy: When typing in details of the allegation against Sgt McCabe, Ms Brophy left details belonging to another client, Ms Y, on the Microsoft Word document. Photograph: Gareth Chaney/Collins

A psychologist and counsellor has spoken of her “panic” when she discovered she had wrongly drafted a report alleging serious child sex abuse against Garda whistleblower, Sgt Maurice McCabe.

She said she discovered her error when contacted by “Ms D”, a client who had made an allegation of sexual assault against Sgt McCabe, and told that a much more serious allegation had been notified to Garda than the one she had made.

Ms Brophy told the tribunal that Ms D called her on May 14th, 2014 and was “emotional, angry and upset”. Ms D said she had been described as having been “raped” and a report to that effect was now with Baileboro Garda station.

The witness told Diarmuid McGuinness SC, for the tribunal, that she felt “panic” when she discovered her mistake and acknowledged it was “a complete mistake on my behalf”.

She said she was contacted by Ms D again that afternoon and asked if the more serious allegation concerned another person who was making an allegation against Sgt McCabe. She told Ms D the allegation had nothing to do with her case in any way.

The tribunal heard that Ms Brophy works with the Rian service in Cavan for adults who have suffered childhood abuse and that she met with Ms D on July 24th, 2013. Ms D told her of an allegation of abuse against Sgt McCabe which had been reported to the Garda in 2007 and did not lead to any prosecution.

Ms D had “everyday coping difficulties” and difficulties with relationships. By the time there was a counselling place available for Ms D, she had moved to the south east.

Meanwhile Ms Brophy had contacted the social worker service in Cavan and asked if they’d received a report concerning the allegation. She knew Ms D had made a complaint to the Garda.

Upon being told that the social worker service had no record of the allegation against Sgt McCabe, Ms Brophy made a retrospective report.

However when typing in the details, she left details belonging to another client, Ms Y, on the Microsoft Word document. These referred to digital penetration and a threat to Ms Y’s father in the case that Ms Y told anyone of the abuse. It appeared that this report was then forwarded to the Garda.

The witness said that once she had discovered the mistake, she apologised to Ms D, and set about getting the return of the report she had sent to Cavan and also to the service in the south east to which Ms D had been referred. She was later told later that Supt Leo McGinn had said the case had been transferred to a Garda commissioner, outside the region.

The tribunal resumes on Wednesday.

Covid-19 vaccination in Northern Ireland can start next week – Swann 19:19
Tánaiste warns of number of ‘unknowns’ around new Covid-19 vaccines 18:27
Court to overturn permission for 660 dwellings near Battle of the Boyne site 18:27
Covid-19: A further five deaths and 270 new cases confirmed by Nphet 18:03
Child sues over catastrophic brain injury suffered in road collision 17:57