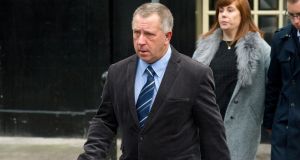 Making owners liable if they allow their vehicles to be driven by an unaccompanied learner driver is under active consideration by the Government.

A call for such a measure was made on Monday by Noel Clancy, the widow of Geraldine Clancy and father of Louise Clancy, both of whom were killed in December 2015 by Susan Gleeson, a learner who was driving her father’s car alone when she crashed into Mrs Clancy’s vehicle.

It is illegal for learner drivers to drive a vehicle unaccompanied by someone with a driving licence of at least two years’ standing.

Gleeson pleaded guilty at Cork Circuit Criminal Court to causing death by dangerous driving and on Monday was given a three-year prison sentence, which was suspended, and banned from driving for 15 years.

After the case, Mr Clancy called on the Minister for Transport to legislate “so that allowing one’s car to be driven by an unaccompanied learner driver is an offence and would make the car owner and driver equally accountable in law”.

It is understood that on hearing this, the Minister, Shane Ross, made inquiries as to whether such a change was possible and desirable, and is believed to have been told that it was.

The legal principle that applies to making an owner liable if their vehicle is not taxed and has no NCT certificate, if required, irrespective of whether they were driving the vehicle at the time of the offence, would apply, according to sources.

“It would make sense to extend the law to cover a vehicle owner allowing it to be driven by a learner driver who was unaccompanied,” said RSA chief executive Moyagh Murdock.

“We’ll be actively talking to the department and the guards about what needs to be done.”

Apart from changing the law, it is understood it would involve having vehicle ownership data and learner permit data accessible on the Garda’s computer storage and retrieval system, which is called Pulse.

The RSA has also submitted to the Government cost of insurance working group that learner drivers be made aware that, if involved in a crash when driving unaccompanied, insurance companies can and do refuse to honour comprehensive policies, confining themselves only to meeting third-party liabilities.