Stardust campaigner honoured with the Spirit of Mother Jones Award 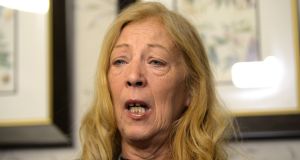 Antoinette Keegan speaking at a press conference last year as relatives of Stardust fire victims gathered at the announcement of a new inquest into the deaths. File photograph: Dara Mac Donaill / The Irish Times

A woman who lost her two teenage sisters in the Stardust fire and has spent the past four decades campaigning to find out the cause of the blaze has been honoured with this year’s Spirit of Mother Jones Award.

The fire at the Stardust Nightclub in Artane on Dublin’s Northside broke out in the early hours of St Valentine’s Day 1981 when 800 young people were in attendance. The fire killed 48 people and another 214 people were injured. It remains the worst fire disaster in the history of the State.

Antoinette Keegan’s sisters Mary (19) and Martina (16) were among those killed in the fire, and she was seriously injured.

Ms Keegan and her mother, Christine, were originally due to speak in Cork at this year’s Spirit of Mother Jones Summer School but it was postponed due to Covid-19 restrictions.

James Nolan of the Cork Mother Jones Committee said: “Sadly, Christine passed away in July after a lifetime of fighting for justice for her two daughters and the other victims of the Stardust Fire, but we’re honoured that Antoinette has agreed to accept this year’s Spirit of Mother Jones Award.

“Antoinette Keegan is a remarkable woman who, along with her family and the Stardust Victims Committee, has campaigned for almost four decades to get to the truth of the reasons for the fire, which cost the lives of their family members.”

Mr Nolan said the recent announcement of a new inquest into the deaths of the victims of the Stardust Fire is testament to the determination of Ms Keegan and her family, and the Stardust Victims Committee, to pursue the truth of what happened on that night in 1981.

“As the families now await the new inquest, which has committed to examine the causes of what happened at the Stardust on February 14th, 1981, we feel it is appropriate to acknowledge the huge efforts made by Antoinette Keegan, who kept on fighting for justice,” he said.

Mr Nolan said Ms Keegan received the award for her determination, resilience and longstanding efforts for justice for the victims and their families.

“In spite of her own injuries, the loss of her sisters, and the failure of the authorities to provide answers, Antoinette has continued to actively campaign to uncover the full truth of the events of that night. She is an inspiration to so many,” he said.

“We will arrange to present the award representing The Children of Lir to Antoinette as soon as it becomes safe to do so in view of the current Covid-19 situation. It is hoped she will be able to come to Cork to speak at the Spirit of Mother Jones summer school in 2021.”

The Spirit of Mother Jones Award has been presented each year since 2013 by the Cork Mother Jones Committee to the person they feel most represents the fighting spirit of Cork born, American trade unionist and children’s rights campaigner, Mary Harris, who was known as Mother Jones.

Mother Jones was born in Cork in 1837 but emigrated to the United States where she became involved in labour unions.

Her activism, reflected in her call to workers to – “Pray for the dead, fight like hell for the living” – earned her the sobriquet, “the most dangerous woman in America”