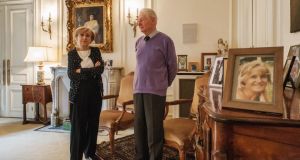 Pictured at their home in Paris are Marguerite and Georges Bouniol, parents of Sophie Toscan du Plantier.

The family of Sophie Toscan du Plantier have expressed satisfaction with the verdict in the Ian Bailey case and say they hope it will give new momentum to the investigation, nearly 20 years after the Frenchwoman was murdered in west Cork.

“We’re pleased,” said Marguerite Bouniol, the mother of Ms Toscan du Plantier, speaking for herself and her husband Georges. “We were afraid that Bailey might win. We told ourselves, ‘If he wins, there’s nothing more we can do.’

“We live so much in anxiety. All of a sudden, everything seems different. This has dragged on so long and it seems like it will never end. Now it’s like a fresh start. It’s great.”

Ms Toscan du Plantier’s only child, her son Pierre-Louis Baudey (34), said the verdict was important “because it shows that the Irish police investigation wasn’t corrupt, as Bailey claimed it was. As a result, it will strengthen the criminal investigation and allow it to continue.”

Mr Baudey expressed frustration, nonetheless. “We’ve had another 90 days of legal proceedings, 60 important testimonies. I’m not cheering; I’m saying there are things that need to be looked into.”

He mentioned, in particular, the testimony of Richie Shelley, to whom Mr Bailey said, “I did it, I did it,” and Helen Callanan, a former Sunday Tribune news editor who testified that Mr Bailey told her he killed Ms Toscan du Plantier “to resurrect my career” – a remark Mr Bailey has explained as black humour on his part.

There was “a certain rationality” to the verdict, Mr Baudey said. “Because if he’d won financial damages from the Irish State, that would have been very hard for us to take.”

Alain Spilliaert, the lawyer for the family, predicted that “the verdict will generate new impetus for the case”. The family have filed a suit with the European Court of Human Rights.

French authorities formally placed Mr Bailey under investigation and issued a warrant for his arrest after receiving a copy of the Garda file.

The testimony of Mr Shelley and Ms Callanan, like the libel trial, “brought important, serious elements to the case”, Mr Spilliaert said. “Someone testified that Marie Farrell said she was going to get money out of the trial. These things have to be followed up. Bailey said the file was corrupted, that the Garda manipulated witnesses.

“Today a verdict rendered by an Irish jury said there was no conspiracy, that the Garda did not manipulate witnesses. Therefore the conclusions of French justice – based on this file and their own, complementary investigation – are solid.”

Co-operation between the Garda and the French justice system ceased during the Bailey trial, Mr Spilliaert said.

“Now there is nothing to stop them co-operating. Now it’s time to speed up the criminal investigation, in Ireland and in France.”