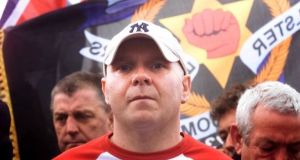 The son of former loyalist paramilitary Johnny ‘Mad Dog’ Adair has been found dead in Scotland.

Police in South Ayrshire were called to a property in Templehill in Troon on Saturday.

The son of the former UDA chief, Jonathan Adair junior, who was known as ‘Mad Pup’, had been released from prison recently.

A Police Scotland spokesman said the death was being treated as unexplained.

A postmortem examination is to be carried out and a report submitted to the procurator fiscal. The Adair family from Belfast settled in Ayrshire over a decade ago after Johnny Adair was forced to flee his home because of loyalist feuding.

3 Coronavirus: Number of vaccine doses given in the State passes half a million, Taoiseach says