Social Democrat banned from reading at Mass due to abortion views 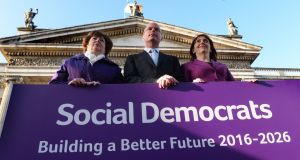 A member of the Social Democrats has expressed disappointment at the refusal of the Bishop of Cloyne to reverse a decision to drop him as a reader at Mass because of his party’s opposition to the constitutional ban on abortion.

Ken Curtin, who ran for Social Democrats in Cork East in the last general election, had a meeting on Wednesday with Bishop of Cloyne Dr William Crean and Fr John McCarthy, the Administrator of St Colman’s Cathedral who told him two weeks ago he was being removed from the rota of lectors.

He sought the meeting after Fr McCarthy informed him that the Social Democrats support for the removal of the constitutional ban on abortion and his own support for that policy disqualified him from being a reader at masses in St Colman’s Cathedral.

“From my perspective the outcome was unsatisfactory in that for now, the decision of Fr John that I be removed as a lector remains in place though they did add that they are happy for the dialogue to continue and that we would meet again in a few weeks time.”

Mr Curtin said he believed it was the wrong decision to remove him from the rota of lectors and it set a precedent that only those whose views accord exactly with church teaching on every issue could actively play a role in the church.

“Each parish operates as an independent republic but the reality is that this has set a precedent - we are now in a scenario where somebody who disagrees with the church’s position on, say contraception, should not be allowed take an active role in the church.

“A lot of people who are Ministers of the Eucharist, lectors, cantors and other public roles within the church would not just disagree but would disagree publicly with the church’s position on issues such as contraception and sex outside marriage.”

Mr Curtin said his faith was important to him but that he was not going to leave the Social Democrats nor was he going to change his views that the Eighth Amendment needed to be repealed as he did not believe a constitutional ban on abortion was appropriate.

“Even from a pro-life perspective there are reasons why the eighth amendment is a flawed piece of the constitution and I still believe the best place to deal with such issues in through legislation.”

Mr Curtin said he had been contacted by several people, including members of the clergy, over the past two weeks to offer their support.

“I feel for the people who have been in touch who, like me, have a very strong faith and see their faith as being important to them while at the same holding particular liberal views on particular issues that don’t always dovetail with the church’s position.”

Diocese of Cloyne spokesman, Fr Jim Moore confirmed Mr Curtin had met with Bishop Crean and Fr McCarthy for 75 minutes to discuss his removal as a reader at St Colman’s Cathedral and “while a dialogue between the Bishop and Ken Curtin will continue, Fr McCarthy’s decision to remove Mr Curtin from the rota of lectors remains in place”.