Postal, fuel and bin companies warn it may take some time to clear resulting backlog 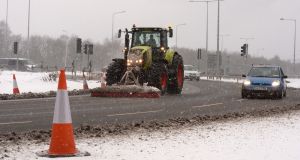 The knock-on effects of work stoppages linked to the freezing weather will continue to be felt over the coming days and into next week. Photograph: Dara Mac Dónaill/The Irish Times.

The knock-on effects of work stoppages linked to the freezing weather will continue to be felt over the coming days and into next week.

Deliveries of letters, parcels, fuel and food stuffs have all been affected by weather related work stoppages and hazardous driving conditions as have pension and bin collections and many other services.

An Post said the safety of its staff and customers was paramount, and some post offices would not be opening on Thursday and possibly Friday.

Acknowledging that Friday was a big day for the collection of pensions, An Post said it was important to assure customers that if affected post offices were not open on Friday, their payments could be collected on Saturday or Monday.

“The important thing is that pensioners know the money is there and doesn’t have to be collected on the day,” an An Post spokeswoman said.

Pensions do have to collected in pensioner’s local offices, due to security issues, and could not be collected elsewhere, she added.

She said parcel and letter delivery across the network would be disrupted as staff were not being told to come to work where there was a health and safety risk.

“Obviously we expect people to get to work where then can,” she said, adding that many mail lorries would not be driving on hazardous roads. The backlog is expected to be worked out over coming days.

The City Bin Company, which operates in Dublin and Galway, said it was suspending services in the two cities on Friday as road conditions were dangerous and deteriorating.

The company apologised for the inconvenience and said that “as soon as the conditions improve, we’ll email our customers about extra collections”.

Greyhound recycling said it had also postponed collections due to worsening of weather conditions and that customers would be notified of further changes to services and new collection days as soon as possible.

A number of home heating oil distribution companies also suspended delivery because of the storm and will be working through delays next week.

Many conferences, concerts and meetings across the State are also being rescheduled.

Routine elective surgery and outpatient appointments have been cancelled at many of the State’s hospitals and patients are advised to check with service providers for new appointments.