Smithwick Report: a timeline of events

Murder, allegation and denial have filled the 24 year period since the Jonesborough killings 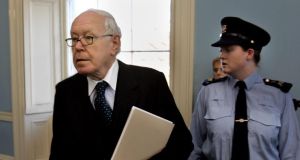 20 March 1989: RUC chief supt Harry Breen and supt Bob Buchanan are shot dead in an IRA ambush near Jonesborough, south Armagh. The officers were returning from a meeting in Dundalk Garda station.

21 March 1989: RUC and Garda reject speculation on the front page of The Irish Press, and elsewhere, that there may be IRA ‘mole’ in the Garda.

Speculation centres on the killings of Northern Ireland Appeal Court Judge, Lord Justice Maurice Gibson and his wife Lady Cecily in April 1987, the Hanna family in July 1988, and Breen and Buchanan. All victims were killed as they travelled from the South into Northern Ireland.

22-23 March 1989: Asst Garda Commissioner Edward O’Dea prepares a report into the circumstances of the RUC officers’ meeting in Dundalk Garda station. He finds no evidence of collusion.

November 1999: A book, Bandit Country: The IRA and South Armagh by British author Toby Harnden published in 1999 and revised in 2000 carried allegations there was a leak from a Garda in Dundalk station.

March 2000: Journalist Kevin Myers, writing the Irishman’s Diary column, in The Irish Times, in March 2000 also alleges there is a leak from Dundalk Garda station which benefits the IRA.

July 2001: British and Irish Governments agreed to appoint a judge of international standing to look at a range of allegations of collusion between paramilitary and security forces, in six murder cases.

One of these was the Breen and Buchanan killings. The other cases were the murders of Pat Finucane; Rosemary Nelson; Lord Justice Maurice and Lady Cecily Gibson; Robert Hamill; and Billy Wright.

October 2003: Retired Canadian supreme court judge Peter Cory finds intelligence documents from security sources “if accepted” could be found to constitute collusion in the killings of Breen and Buchanan. He says “there must be a public inquiry”. Referring to journalist Kevin Myers and author Toby Harnden, Cory foundtheir conclusions regarding collusion “appear to be based upon hypothesis, speculation and a source or sources of information that the authors refused to disclose. Statements and allegations were put forward as matters of fact when in reality they were founded upon speculation and hypothesis.”

May 2005: The Smithwick Tribunal is set up under the chairmanship of Judge Peter Smithwick. It is unique among the tribunals in that it is to inquire into killings outside the State.

Former Monaghan Inspector Tom Curran tells tribunal Bob Buchanan had said the RUC was worried about the relationship between Owen Corrigan and the IRA . Mr Curran says at Buchanan’s request he took this information to Assistant Garda Commissioner Eugene Crowley.

July 2011: Owen Corrigan commences his evidence. Over the course of 15 days he consistently denies he passed information to the IRA and says he was the “jewel in the crown” of the State’s fight against the Provos.

Leo Colton gives evidence. He rejects suggestions from counsel that he asked Finbarr Hickey to sign blank application forms, for false passports which benefited the IRA.

November 2011: Tribunal is due to complete its work but secures an extension of time to early 2012.

May 2012: Finbarr Hickey commences evidence. He acknowledges he served a jail sentence for signing blank passport application forms , but says he did not know they were intended for the IRA. He says former colleague Leo Colton asked him to sign the forms.

Tribunal secures an extension of its deadline following a brief spat with Minister for Justice Alan Shatter. The tribunal now hopes to conclude its hearings by November.

October 2012: Tribunal seeks another extension of its deadline after medical evidence is given that key witness Owen Corrigan needs a heart bypass.

November 2013: Judge Peter Smithwick submits his report to the Oireachtas.

December 2013: Report is published by Minister for Justice Alan Shatter.