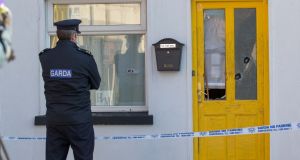 Garai at the scene in Connolly Street, Sligo, where the body of a young man was found. Photograph: James Connolly

A young man who died following a violent assault in Sligo at the weekend was remembered by former colleagues as someone who always lifted their spirits with his good humour.

The dead man has been named as 20-year-old Jimmy Loughlin, a native of Kilross between the villages of Ballintogher and Ballygawley in Co Sligo. He had been renting a flat in Connolly Street close to the centre of Sligo town.

Gardaí launched a murder investigation following the discovery of his body there on Saturday afternoon. It is understood that gardaí believe he was beaten with a heavy object.

Friends and neighbours said they were bewildered as to how someone who had such a quiet personality could die in such violent circumstances.

A 31-year-old man was arrested close to the scene and has been charged in connection with the incident. He will appear before Donegal town district court at 10.30am on Monday morning.

Mr Loughlin had been working in McDonald’s fast food restaurant on the outskirts of Sligo town. Restaurant manager Leo McNamara explained that he had first worked there a transition year student in 2014.

“Jimmy had a great sense of humour and everyone loved working with him as he lifted their day with his fun personality,” said the manager. “If you knew you were working with Jimmy you knew you would end up laughing, regardless of what mood you were in.”

The owner of the McDonald’s franchise in Sligo,Richard McNamara, said the company was offering support to all staff who worked with the young man. “We are all shocked and saddened by the loss of Jimmy - he was a much loved member of our team,” said Mr McNamara.

Thomas Walshe a community activist in the Ballygawley/Ballintogher area said Mr Loughlin was regarded by his friends as someone who “would not harm a fly”. He said the young man who had recently started working as a DJ around Sligo town and was very popular. “He was very quiet. People are really shocked that such a thing would happen to him. He was just a harmless, innocent young man”.

Mr Loughlin did his Leaving Cert at Coola Post-Primary School in 2016. The school’s principal Damian McGoldrick described him as a “popular, inoffensive young boy” who was very well liked by both his peers and by the staff. He explained that because Mr Loughlin had a reputation for being kind to younger students and for being a quiet student who would never court trouble, the news had stunned the community.

“The whole school community is shocked and saddened by this horrific tragedy”, said Mr McGoldrick. “Our thoughts and prayers are with his parents Michael and Paula and his sisters”.

A school fundraiser due to take place in the nearby village of Sooey on Saturday night , was cancelled as a mark of respect, as were a number of other community events.

Mr McGoldrick said that the Loughlin family were very popular and well respected. Mr Loughlin’s two younger sisters Kitty and Rose are in third year and transition year at the school while an older sister, Grace, is a past pupil pupil.

It is understood that Mr Loughlin had been sharing the flat on Connolly Street with friends who were away on Saturday with a group from Ballintogher doing a sky-dive in aid of Pieta House.

This is the third fatal attack in this close-knit residential area in recent years.

In September 2012, Eugene Gillespie (67) was murdered in his home on Old Market Street, which runs onto Connolly Street.

In October 2015, 23-year old Natalie McGuinness from Easkey Co Sligo was murdered in a house on Mail Coach Road.

As gardaí continued to question the suspect on Sunday, a postmortem was carried out at Sligo University Hospital by the deputy State pathologist Dr Linda Mulligan .

Gardaí are appealing to anyone who may have witnessed the assault or anyone with information to contact Sligo Garda station on 071-9157000, the Garda confidential line on 1800 666 111 or any Garda station.