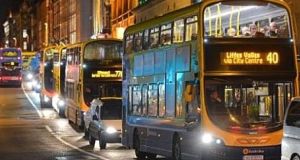 In several areas under review the plan will require front gardens and other properties to facilitate road widening. Photograph: The Irish Times

Public consultation has been opened by the National Transport Authority on six additional routes for phase two of Dublin’s BusConnects plan.

Homeowners who may lose part of their front gardens to preferred routes on which busways will be run have already been notified.

The BusConnects agenda comprises a substantial redrawing the capital’s bus network. It is a proposed core bus corridor project providing 230km of bus lanes and 200km of cycle lanes on 16 of the busiest bus corridors in and out of the city centre.

In several areas under review the plan will require front gardens and other properties to facilitate road widening.

On these six corridors annual passenger growth in Dublin Bus services has increased by up to 19 percent between 2015 and 2018. But the increased usage has taken place in the context of worsening congestion, with delays frequently experienced by commuters.

The full detail of the routes is on busconnects.ie