Sheehy Skeffington to use equality award to help colleagues 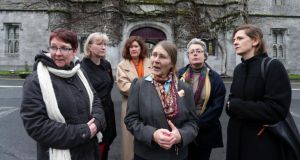 Scientist Dr Micheline Sheehy Skeffington says she plans to use a €70,000 award ordered by the Equality Tribunal to help five other female academics who claim to have been passed over for promotion by NUI Galway (NUIG).

The five lecturers in various arts and science disciplines, who spoke to journalists, said they believed they had also been discriminated against in the same 2008/2009 promotion round as Dr Sheehy Skeffington.

None of the five can take an Equality Tribunal case, as they are beyond the time limit, but they said they were considering a High Court challenge.

The five, along with Dr Sheehy Skeffington, were among seven women shortlisted from 15 female candidates who applied for senior lectureships in 2008/2009.

Only one woman was promoted in that round, along with 16 male candidates, to fill the 17 senior lecturer posts.

Discrimination “It was on reading the tribunal findings that we all realised that we had experienced discrimination,”the academics said.

All five had applied again in the most recent – 2013/14 – promotion round, they said, but had not been successful.

In finding that Dr Sheehy Skeffington had been discriminated against, the Equality Tribunal ordered NUIG to pay her €70,000, promote her and review its appointments system.

The botanist – who is the grand-daughter of suffragette Hanna Sheehy Skeffington – has recently taken early retirement.

“The last time I was promoted was when Mary Robinson was elected president – in 1990 – and I have applied five times since then,” Dr Sheehy Skeffington told The Irish Times.

“I took my action to help other women and not just for myself, so now I want to help them,” she said.

Dr Sheehy Skeffington, who addressed Dr Browne on the issue at a staff meeting on Wednesday, said it had cost her €16,000 to fight her successful case, at a time when she had to work part-time due to illness.

A Higher Education Authority (HEA) report published this week found that the gender divide is most pronounced in NUIG, where almost four in every five (79 per cent) senior academic staff members are male.

Dr Browne said the university had already “unreservedly accepted” the Equality Tribunal’s recent decision on the 2008/9 senior lecturer promotion round.

The university “views the issue of gender equality very seriously”, and “recognises that in the past, it and the Irish education sector as a whole, has had a poor record on the promotion of women into senior roles”, he said. He said that the university had introduced a new promotion scheme, and reviews were ongoing. More than one-third of candidates selected for 28 recent promotions were female.

A task force to review practices on gender equality had also been set up, and NUIG would take up a “kind offer” by Dr Sheehy Skeffington to work with the college on improving policies and procedures, he said.