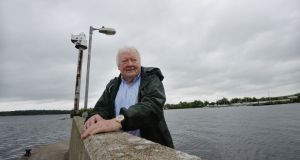 Farmers, stud farmers, tourism groups and residents in the Lough Derg area have called on politicians to halt Irish Water’s €1.3 billion plan to pump water from the River Shannon to the east coast.

Two campaign groups based in Co Tipperary and Co Limerick have said they will lodge objections to the planning application for the project when the State water services utility submits it to An Bord Pleanála.

The final route for the proposed underground pipeline was unveiled on Tuesday.

The 170km route would run from Parteen Basin in Co Tipperary through Co Offaly to Peamount in Dublin, if approved under strategic infrastructure legislation.

The River Shannon Protection Alliance (RSPA) said it opposed the plans on environmental and economic grounds, and that there were far less costly and damaging alternatives to the project.

It has circulated a report by a legal expert outlining its case to all Oireachtas members.

Meanwhile, the Fight the Pipe campaign, representing farmers along the proposed route in Co Tipperary, said Irish Water was deliberately playing down the long-term damage to land that would be caused by the project, and was “intent on building a piece of infrastructure which will then be privatised”.

The project aims to supply 330 million litres of water a day to Dublin and the midlands – equivalent to 125 Olympic-sized swimming pools daily.

This would include drinking supplies for an estimated 40 per cent of the population and would also supply water for industry, Irish Water said.

The State utility cited estimates that the population of the Greater Dublin Area will rise from 1.5 million people, as was recorded in the 2011 census, to 2.1 million by 2050.

It said that addressing a leakage rate of 40 per cent in Dublin and introducing conservation measures would not be sufficient to meet future demand.

Last year, it ruled out the desalination of sea water on the east coast and extraction further up the Shannon as options to meet this demand.

It said that extraction from Parteen Basin will have the least environmental impact.

However, RSPA spokesman Donal Whelan said that the project will have a major environmental impact in the Lough Derg area.

He said the RSPA believed Irish Water did not adequately address alternatives which would not have such an economic cost.

Irish Water should focus on repairing the 40 per cent leakage rate in greater Dublin, instead of “spinning a view that the capital needs this and nothing else”, he said.

Mr Whelan also repeated the views of Dr William O’Connor of the Ecofact consultancy in Limerick, who formerly worked as a senior fisheries biologist with the Electricity Supply Board (ESB).

Dr O’Connor has argued that there is already an “unsustainable” water abstraction rate from the lower River Shannon special area of conservation (SAC) at the Parteen regulating weir-Ardnacrusha headrace.

Dr O’Connor has said the pipeline would not be an acceptable abstraction under either the EU Water Framework Directive or the Habitats Directive.

Oireachtas members will be among the first to be briefed by Irish Water as part of its 14-week consultation period on the project.

The utility aims to compensate the ESB for the lost capacity to generate at Ardnacrusha which would result from the project.

It also aims to compensate the up to 500 landowners who would be affected on a voluntary basis, before resorting to compulsory purchase.

If the project is approved by An Bord Pleanála, the utility expects to begin the three-year construction process in 2021.

Speaking on the project, the IFA said the concerns of “all landowners must be heard and addressed”.

However, Mr Liam Minehan, of the Fight the Pipe campaign, said the IFA and the Irish Creamery Milk Suppliers Association (ICMSA) were in favour of the project, and were only interested in determining compensation.

“Nothing will compensate me for the degradation and damage this will cause,” he said.

“This project is about capitalising an asset, because water is our white gold.”