Scheme would not put State-owned companies on road to privatisation, says Minister 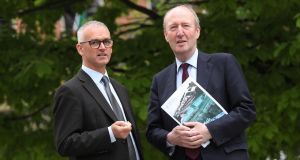 Prof Alan Barrett, director of the ESRI, and Minister for Transport Shane Ross at the round table discussion on public transport held in the Mansion House, Dublin. Photograph: Robbie Reynolds

Minister for Transport Shane Ross has suggested a new profit-sharing scheme could be introduced for thousands of staff in the State-owned CIÉ group of companies.

He insisted any such profit-sharing arrangement for employees in Irish Rail, Dublin Bus and Bus Éireann would not represent the start of the road to privatisation.

Speaking at the end of a conference he hosted on Monday on the future of public transport policy, the Minster said he recognised that many staff in the State companies “felt forgotten” and had a certain amount of grievances.

He said an alignment of interests in the transport sector could see any benefits shared around.

Mr Ross said he would ask New Era, the agency which provides financial and commercial advice to Government Ministers on major commercial State bodies, to examine the profit-sharing proposals which he said could pose some difficulties because of the State subventions to these companies.

He said such a move towards introducing profit-sharing would allow workers who bore the brunt of the pain over recent years to share in the rewards.

Trade unions at the round table conference in Dublin had warned that current transport policies were a recipe for disaster and would inevitably lead to widespread industrial action across the sector.

The National Bus and Rail Union (NBRU) and Siptu criticised the National Transport Authority policy of putting out to tender a number of routes that had traditionally been provided by the State-owned bus companies.

NBRU general secretary Dermot O’Leary said the British company Go Ahead, which won a tender to operate 10 per cent of routes in Dublin city, would be paying its drivers significantly less than their counterparts in Dublin Bus.

My primary focus is the public transport user. Ensuring that they get from A to B, in an efficient, accessible, sustainable and reasonably priced way

He warned of potential future disputes as workers employed by the UK company sought pay parity with their counterparts in Dublin Bus.

Greg Ennis of Siptu said the 6,000 workers in the CIÉ group of companies, which had seen their State funding cut by over 40 per cent over recent years, had experienced pay cuts and pay stagnation for almost a decade. He said this had led to a number of industrial disputes over recent years as workers would no longer subsidise State companies.

Mr Ross told the conference that he would not be an advocate for an agenda of privatisation but nor would he be a representative of the management of the State companies or any other stakeholder in the transport sector.

“My primary focus is the public transport user. Ensuring that they get from A to B, in an efficient, accessible, sustainable and reasonably priced way is my goal, while being cognisant of the need for economy in using taxpayers’ money. That is my goal and something I think we can and should work together to ensure.”