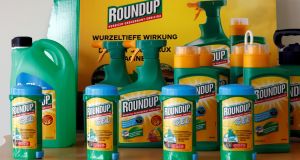 Glyphosate is the active ingredient in Monsanto’s Roundup weedkiller, the most commonly used herbicide in the world. Photograph: Reuters/Denis Balibouse

The first study of exposure in adults to glyphosate, the most commonly used pesticide in Ireland, has found the general population is subjected to “low exposure” from the chemical but within acceptable EU safety limits.

Led by NUI Galway (NUIG) researchers, it investigated background levels of the active ingredient in more than 750 products including Roundup, the world’s commonly used herbicide, which is made by Monsanto.

Glyphosate is extensively used in agriculture and horticulture to combat weeds, and is sprayed as a pre-harvest treatment on some food crops. It is also widely sprayed in parks, public spaces, lawns, gardens and roadsides.

It was re-licensed by the EU last year for five instead of the usual 15 years because of a scientific row over whether it causes cancer.

Since then, several EU municipalities, regions and countries have moved to ban it, while MEPs have called for a phase-out by 2022. The European Commission, ahead of the renewal, recommended it be limited in public spaces and at harvest time but backed off this after intensive lobbying.

France and Germany are weighing up all-out bans, but farmers and local authorities are struggling to find other effective options available at reasonable cost.

NUIG researchers and collaborators from the UK Health and Safety Executive measured glyphosate in urine samples provided by 50 Irish adults to estimate background levels of exposure among this population. Of the samples analysed, 20 per cent had detectable trace levels of glyphosate. Concentrations were more than 1,000 times lower than the “acceptable daily intake” level set by the European Food Safety Authority.

The study, published in the journal Environmental Research, was carried out by PhD student Alison Connolly and post graduate student Michelle Leahy.