Ceremony in Cork’s Shalom Park for Jewish Festival of Lights 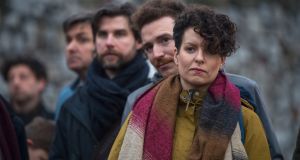 Some of those who gathered in Shalom Park in the heart of Cork’s old Jewish quarter on New Year’s Eve. Photograph: Michael Mac Sweeney/Provision

They began gathering at Shalom Park in the heart of Cork’s old Jewish quarter on New Year’s Eve long before the last gleam of light receded.

It was not just the fact that the eighth day of Hanukkah fell on the last day of the year that explained the large attendance at this year’s event. The marking of the Jewish Festival of Lights was notable for being the first to take place following the closure of the synagogue on South Terrace in February, and the death of Jewish community’s stalwart Freddie Rosehill (89) in November.

As Maurice Cohen, chairman of the Jewish Representative Council of Ireland, said of Mr Rosehill: “Freddie Rosehill was there for it all – in the heyday of Cork Jewish life, in the mid-century and later on – he showed up first and departed last.”

That heyday came in the 1930s when 65 families created a vibrant community of more than 500 Jews living mainly in the Albert Road area. The community boasted two Jewish football clubs, table tennis and debating clubs and a branch of the Zionist Youth Movement.

While that Jewish community no longer exists, Mr Rosehill was remembered at Saturday night’s Festival of Lights in Shalom Park where an artwork by New Zealand artist Maddie Leach was lit up in keeping with the Festival of Lights or Hanukkah.

David Coon, a British-born Jew who lives in the Macroom area in Co Cork, said “it is customary to burn Hanukkah candles sequentially for half an hour after sunset each night for eight nights, and it is only on the eighth night that all nine candles in the candelabra will be alight”.

He explained that Hanukkah marks an event in 165BC when Jews, led by Judah, revolted against the Seleucid monarchy and recaptured a temple.

“Similar to the Hanukkah menorah, one lamp in this park is taller than all the rest – this is the ninth lamp – representing the Shamash – the light used to kindle all the other lights,” said Mr Coon, as the Shamash lamp was lit at 4.24pm, 10 minutes before sunset.

Then, in keeping with tradition, the Shamash light was quenched at 5.04pm and will remain so until the last day of Hanukkah in 2017.