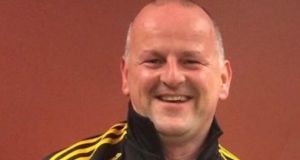 Sean Cox suffered serious injury after he was attacked at random by an AS Roma supporter outside Anfield last year.

Sean Cox, the Liverpool fan who suffered a brain injury when he was attacked last year, was left “overjoyed” after his beloved Reds were crowned champions of Europe in Madrid.

Mr Cox was discharged from the National Rehabilitation Hospital for Saturday evening. He watched the game at his home in Dunboyne, Co Meath, surrounded by family and friends.

He joined his family in an emotional rendition of You’ll Never Walk Alone after Liverpool’s 2-0 victory and returned to hospital elated.

Mr Cox suffered a serious brain injury in an attack by an Italian hooligan last year.

His wife Martina Cox said: “The club and its fans have taken Sean, our family and I, into their hearts since Sean’s attack last year.

Been some great photos tonight, this is the best...#SeanCox pic.twitter.com/eBqR0Ktf2o

“Nobody could be happier than the Cox family for Jurgen Klopp, his players and the wonderful Liverpool fans.

“Sean watched the game with us at home, proudly wearing a signed Liverpool jersey sent to him by the club’s CEO Peter Moore last week.

“He was overjoyed when the final whistle blew and Liverpool were crowned champions.”

Mr Cox (54) who continues his rehabilitation in hospital in Dun Laoghaire, near Dublin, is a former company director.

He suffered major head trauma when he was struck in a random assault by a masked AS Roma supporter outside Anfield in April last year ahead of a Champions League tie.

Mr Cox’s wife added: “On Sean’s behalf, I want to offer our heartfelt congratulations to Liverpool Football Club on winning the Champions League.”

Tens of thousands of fans recently descended on the Aviva Stadium in Dublin to raise money for the injured fan’s treatment.

The Legends For Sean Cox match, organised by his beloved Anfield side, saw Liverpool FC Legends take on a Republic of Ireland XI Legends team to raise money for The Sean Cox Rehabilitation Trust. – PA