Seamus Mallon: A man of principle and deep personal courage 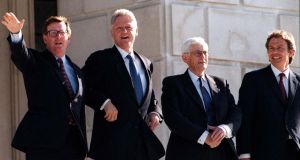 I first met Seamus Mallon in the late ’70s in London, where he had come to lobby the Labour Party, at that time dependent for its House of Commons majority on Northern Ireland’s Ulster Unionist Party.

Though he knew his efforts were unlikely to change British government thinking on Northern Ireland, it was typical of his determination to pursue what he thought was the right thing he still believed he had to try.

Since that first encounter, I have known and worked with Seamus for more than 40 years and I learned to respect his commitment to principle; the thoroughness and determination which he brought to his work; his humanity, which underlay his total opposition to the use of violence and his respect for unionist rights; as well as his strong, personal courage in opposing wrongdoing, no matter the perpetrator.

As he made clear in the many interventions which he made in the New Ireland Forum in 1983-84, he was a traditional Irish nationalist and he insisted a unitary state be included as one of the proposed solutions of the forum for the divided island.

He believed that, without this commitment on the part of nationalist representatives, those in Northern Ireland who wanted unity would have no one to support other than the Provisionals. But, in direct contrast, he always accepted unionist rights and was a staunch opponent of those who sought to force them into a united Ireland against their will. And, in the politics of the period, his nationalist views brought him closer to Charles Haughey than to Garret FitzGerald.

During the negotiations on the Anglo-Irish Agreement, John Hume initially, and later the SDLP leadership, were briefed on a confidential basis by the Irish government on developments in the discussions.

A central aim of the agreement was to deal with and resolve problems faced by the nationalist community in Northern Ireland – the issues which sustained division – whether it be discrimination in employment and services or abuses by the security forces. Clearly, such a policy could work only if it had the support of Northern nationalists and their representatives, thus making Mallon – often seen as the conscience of nationalist Ireland – a key figure.

The issue was further complicated by the tension between the government in Dublin and the opposition leader, Charles Haughey, whose own efforts to strike any deal with Britain had faltered under pressure of the hunger strikes and the Falklands conflict. Moreover, after the famous Out-Out-Out press conference by Margaret Thatcher, in which she dismissed the three main recommendations of the New Ireland Forum, Charles Haughey made clear to the government in Dublin that all prospects of bipartisanship on Northern Ireland were dead.

Seamus, on the other hand, took a very cautious, almost contemplative, approach. He carefully studied the draft agreement documents, asking himself whether the emerging proposals would make a difference in resolving the many difficulties faced by Northern nationalists. He concluded that they would and explained over a dinner between the government and the SDLP leadership, not long before the signing of the Anglo-Irish Agreement in November 1985, that he would support the accord.

As he says in his autobiography, A Shared Home Place, he saw the agreement as a horse rather than a camel – a reference to its clarity of purpose rather than the confused outcome of multiple compromises – and asserted that it would, therefore, do the job. He adds there was a sigh of relief around the table. That is to put it mildly, given the sense in Dublin that, without his support, the agreement would fail to garner the level of nationalist support in Northern Ireland needed to sustain it.

Attitudes to Seamus in Markethill have changed

This decision shows both his attention to detail, his independence of mind and his deep personal courage. He gave his support only when satisfied the abuses of the security forces and bias in the courts, as well as many other problems faced by his constituents, would be challenged through the intergovernmental structures established under the agreement.

He knew his friend, Charles Haughey, for whom he had high regard, would be unhappy. But, having made a commitment, he worked hard over the following years to make the agreement work despite the attacks on it from both unionists and the Provisional IRA. It took courage to do what he did, though he was wounded by the fact that Charles Haughey never spoke to him again.

Seamus won a seat in the House of Commons shortly afterwards and brought his strong work ethic, his principles and his attention to detail to his work there over a period of more than 20 years. This was particularly true during the passage of the legislation to reform policing in Northern Ireland. He worked tirelessly in committee as indeed did his colleague, Eddie McGrady, on equality legislation.

Seamus was equally central to the Belfast Good Friday agreement and played an important role in the establishment of the devolved Executive where he served as Deputy First Minister, working closely with David Trimble.

He ensured, despite great opposition from the then secretary of state for Northern Ireland, Peter Mandelson, that the British legislation faithfully implemented the recommendations of the Patten Commission in full.

He followed the legislation in great detail, as he had the Anglo-Irish Agreement in 1985, and deliberated for a long time before committing the SDLP to support the PSNI, the first time a nationalist party in Northern Ireland had ever given its full support to the police. And again, at a dinner with the Irish government delegation in Weston Park, he used that old phrase, “the proposal was a horse and not a camel”.

Seamus lived in the largely unionist village of Markethill, Co Armagh, and was often advised to move because of his isolation and vulnerability. It became particularly unpleasant during the marching season or on the not insignificant number of occasions when as he was abused by unionist opponents. But he courageously refused to move. He lived there with his beloved wife Gertrude and nursed her there in her long-lasting illness until her death a few years ago.

But attitudes to Seamus in Markethill have changed. I was advised recently by a friend travelling north to visit Seamus that he, the friend, had difficulty locating Seamus’s house in Markethill and sought directions in a high-street business. He covered up Seamus’s name but showed the address.

“You’re looking for our Shamie?” he was asked and then, with the smiling merchant’s arm around his shoulder, was brought onto the street and directed to the house. On being told of the experience, an amused Seamus, acknowledging the obvious evidence of the transition of his perception from villain to paragon, mentioned that the guide had been a senior member of the Orange Order.

Dáithí Ó Ceallaigh was Ireland’s ambassador to the United Kingdom from 2001 to 2007, and worked directly on Northern Ireland for many years as a Department of Foreign Affairs official