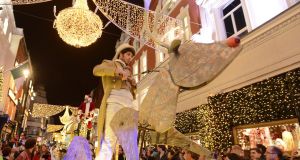 An Oireachtas committee has vowed to fight “Scrooge-like” plans by Dublin City Council to cancel the traditional Christmas tree lighting ceremony because it would interfere with Luas services.

The Oireachtas petitions committee on Wednesday heard the move was symptomatic of a wider loss of festive spirit across the capital.

Dublin City Council said it had decided to cancel this year’s Christmas tree ceremony at the GPO on O’Connell Street so as not to disrupt Luas Cross City services. It said last year’s event had attracted larger numbers than expected and had been the subject of several complaints over crowd safety.

It said the ceremony would be replaced by several smaller events around the city.

Rejecting this position, committee chairman Seán Sherlock said it would be a “shame” to end the tradition and he appealed to the local authority seeking an alternative site.

“I think Dublin City Council, they’re having a laugh; they’re being a bit Scrooge-like,” said Fine Gael Senator Jerry Buttimer, who urged the local authority to consider Smithfield Square as a venue.

“There is a tradition in almost every town in our country that they have an official switching on [ceremony],” he said. “Are we really saying as the capital city of Ireland that we cannot . . . manage the turning on of a Christmas tree event?”

While the committee has no power to affect the outcome, it can make official representations on issues brought to it by members of the public.

“Winter Lights Dublin City is not just one event but will take place citywide during the festive season,” it said. “This means that it . . . takes place over 30 nights to give everyone the opportunity and space to experience the lights and projections, at a time that suits them.”