Scottish and Orange: ‘In Scotland there’s a hatred of anything unionist’ 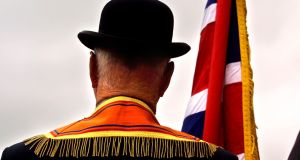 ‘People who don’t know us ... think we are a sectarian organisation and we hate everybody, we hate Catholics.’ Photograph: Sion Touhig/Getty

Jim McHarg has always been struck by the similarity between Scotland and Northern Ireland. “It’s the same kind of idea of small towns and villages, and the Ulster Scots link is obviously there.”

This is most evident, he says, in the “mentality and the friendliness of the people from Northern Ireland and Scotland ... I think they’ve got the same kind of humanity.”

It is no coincidence that the first Orange lodge in Scotland was established here around 1800. “Regiments who were serving and fighting in Ireland brought the warrants from there,” McHarg says. “They were probably mixing with people who were members of the Orange Order for the reasons it was there, to protect land, property and Protestant life – that’s the way they saw it, anyway – and they liked it.”

Today McHarg is grand master of the Grand Orange Lodge of Scotland; he emphasises church, charity work and camaraderie and says the focus of his tenure is about inclusivity and challenging perceptions.

“People who don’t know us ... think we are a sectarian organisation and we hate everybody, we hate Catholics.

“If we’re confident in ourselves as to why we exist, we shouldn’t have a problem taking questions and saying to people, ‘This is who we are. Give us a chance’.”

But perhaps inevitably, these questions of identity are much to the fore in contemporary Scotland as the country heads towards elections in May. Since June, opinion polls have shown a consistent majority of about 54 per cent in favour of independence, and the elections will be dominated by the prospect of a second independence referendum as well as the outworkings of Brexit and Covid-19.

Here McHarg is clear: he is “equally proud” to be both Scottish and British, and argues that for many Scots there is no contradiction between the two. “I think it’s one and the same thing.”

Scotland “will be better and stronger as part of the union,” he says. He points to the Westminster-funded job retention “furlough” scheme, and the jobs created by new ship-building contracts on the Clyde.

“The United Kingdom being together is better than being apart and being split, and I might see it through rose-tinted glasses, blue glasses, Orange glasses, whatever ... but how anyone can think this country would have survived the pandemic is beyond me.”

He fears Scotland is also becoming a divided country. “The way I see it, there’s a hatred, certainly a dislike, of anything unionist.”

The solution is to “choose the unionist candidate that’s got the best chance of winning in your area,” McHarg says. He is a Tory but he has voted Labour – and even canvassed for a Labour candidate – in the past in order to seek victory for the pro-union candidate.

The problem in Scotland, he says, is that there are too many unionist parties – the Conservatives, Labour and the Liberal Democrats – which risks splitting the vote. “I would wish that the Scottish unionist people would ... use their votes, lend their votes to whichever party [has the best chance of winning].”

This must also be bolstered by the UK government: “Boris Johnson and the parliamentarians [in Westminster] have to start talking up the union, what it’s done for people, what it will do for them if they remain part of the union.”

This may prove a hard sell, not least because of Johnson’s unpopularity north of the border, and the question of how damaging the fallout from Brexit will be still hangs very much in the balance.

Of the union as a whole, he is relatively unconcerned about the potential implication of “paperwork” at an Irish sea border. “The important thing for me is that the government we have want a UK, so I don’t see them selling Northern Ireland out.”

Though he is “always worried” about the union, he believes “it will survive. I’m pretty confident we’re going to get the message out better.”