Schoolgirls on Brexit: ‘The adults are not thinking straight’

St Patrick’s pupils in Crossmaglen, on the Border, explain Brexit to The Irish Times

School children from Crossmaglen talk to Simon Carswell from the Irish Times about living on the border, Brexit and the Troubles. Video: Enda O'Dowd 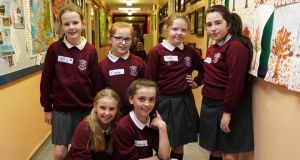 The six local schoolgirls all know it as “Cross”. Most others know this village in south Armagh, just 3km across the Border into Northern Ireland, as Crossmaglen.

The village was once famous for its nationalist defiance at British rule and the de facto capital of what became known to UK security forces as Bandit Country. It is now a quiet and bustling little town with narrow, traffic-congested streets and a busy village square with plenty of comings and goings.