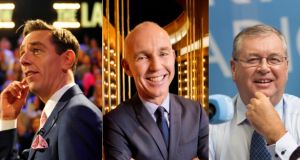 The salaries of RTÉ’s top earners have been controversial conversation topics for many years, but under new plans the high-profile presenters are set to see a 15 per cent pay cut.

On Wednesday, the national broadcaster announced a number of measures it intends to implement in order to save €60 million over the next three years.

Among other measures, the plan envisages around 200 job cuts, high-paid presenters receiving a 15 per cent salary reduction and RTÉ executives receiving a 10 per cent cut in wages.

According to the most recently published figures, salaries for the 10 highest-paid presenters amounted to €3 million in 2016.

Television and radio presenter Ray D’Arcy was the second highest earner, with €450,000, which was €50,000 higher than the previous year.

Radio One presenter Joe Duffy was the third highest paid with earnings of €389,988, while Sean O’Rourke earned €308,964 for his morning news programme on Radio One.

Bryan Dobson, who now presents Morning Ireland, received €198,146 for his work on the Six One News.

The salaries for the broadcaster’s executives are also due to undergo cuts under the plan.