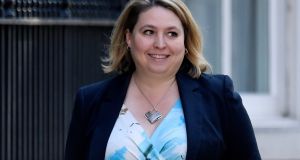 Karen Bradley, who has been sacked as Northern secretary by new UK prime minister Boris Johnson. Photograph: Will Oliver/EPA

Saying that it had been “an enormous privilege” to “represent this special nation and integral part of our precious union”, the 49-year-old MP said she was disappointed not to be able to lead the current Stormont talks to a finish.

Julian Smith has been named as her successor. Formerly Theresa May’s chief whip in the House of Commons, Mr Smith was a key figure behind-the-scenes in trying to build a majority in Parliament for her Brexit deal.

During her time in charge, Ms Bradley was accused of not having a strong command of her brief, particularly after she said she was unfamiliar with the distinction between unionists and nationalists.

Sinn Féin president Mary Lou McDonald sought an early meeting with the prime minister, reminding him of London’s obligations “to honour and implement their commitments” under the Good Friday and subsequent agreements.

These agreements are “incompatible with Brexit”, she said. “The people of the North voted to remain within the European Union and that vote must be respected.”

Democratic Unionist Party leader Arlene Foster declined to say whether she would make it a condition that legislation on same-sex marriage and abortion must be left to Stormont to decide upon.

Legislation proposed by Labour MPs was passed at Westminster this week whereby gay marriage and the liberalisation of abortion law would be introduced in Northern Ireland if devolution is not restored by October 21st.

Saying that she was “much more focused” on getting power-sharing back, Ms Foster said she hoped that the United Kingdom would quit the European Union by the end of October as Mr Johnson has pledged.

SDLP leader Colum Eastwood said Mr Johnson’s first Downing Street address “was bloated with bluff but short on solutions to the challenges of Brexit”, adding that this “new administration, led by a populist, must face reality quickly”.

Ulster Unionist Party leader Robin Swann hoped that the optimism in Mr Johnson’s speech was “reflected in the actual delivery”, though he warned that “rhetoric alone will not solve our problems”.

Meanwhile, Ann McGregor, chief executive of the Northern Ireland Chamber of Commerce and Industry, said Mr Johnson has taken up office at a time of “deep frustration” for Northern Ireland’s business community.

Last month, a report from Stormont’s economy department warned that Northern Ireland could lose 40,000 jobs if the UK crashes out of the EU without a deal.

“Companies want to see a pro-business approach from the offset. Specifically, he must deliver a sensible and pragmatic plan to break the Brexit impasse, demonstrating that the new government is fully committed to avoiding a messy and disorderly exit on October 31st,” said Ms McGregor.