Ryanair calls time on its calendar of cabin crew in bikinis

Calendars were first published in 2008 and raised money for charity 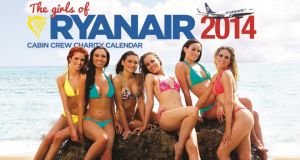 Ryanair has called time on its calendar of cabin crew in bikinis.

The low-fare airline’s chief executive Michael O’Leary told Today FM that the calendar will not be published for 2015.

The calendars were first published in 2008, with adverts for the product being banned in Malaga in Spain last year for being “discriminatory”.

This morning, a Ryanair spokesman said: “We are finalising our charity options for 2015 which will be unveiled soon.”

Mr O’Leary said the idea for the calendars came from Ryanair staff. “I think it was a great idea by the cabin crew. It genuinely did raise huge amounts of money for charity and we will struggle to replace it with something as good or as successful.”